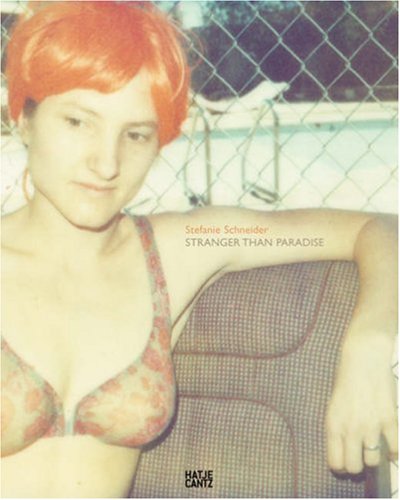 Stefanie Schneider: Stranger than Paradise
by Eugen Blume
Publisher's Description
Stefanie Schneider uses expired Polaroid film to photograph her friends in wigs, in silver underwear, in trailer parks, and on rooftops, in a retro B-movie aesthetic helped along by the instant-antiquing of the discolored film and by the fact that some of her models are genuine movie stars. Among motel signs from the 50s, palm trees against the blue sky, candy-colored limousines, a gas station in the middle of nowhere, we find young people who seem oddly lost, vacant-eyed—among them Naomi Watts and Ewan McGregor. Director Marc Forster has picked up on Schneider’s movie-friendly aesthetic and integrated her work into Stay, his new thriller starring Watts and McGregor. Stranger than Paradise, Schneider’s latest reminiscence of a Hollywood that may never have been, that may be more David Lynch and Last Picture Show than anything real, has been created and brought out in cooperation with Hollywood as we know it today, and is to be released in conjunction with the film. Essays by Eugen Blume, Marc Forster and Mark Gisbourne.
ISBN: 377571751X
Publisher: Hatje Cantz Publishers
Hardcover : 200 pages
Language: English
Dimensions: 0 x 0 x 0 inches