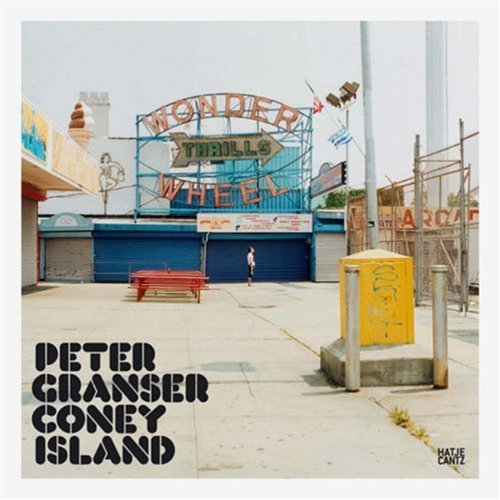 Peter Granser: Coney Island (Emanating)
by Peter Granser
Publisher's Description
Peter Granser, who lives in Stuttgart, Germany, commutes to the U.S. for work: his two previous books of photographs, Sun City (2003) and Alzheimers (2005) observe aging and illness among preternaturally prosperous and tan American retirees. Coney Island brings his gaze to an outpost of retro beach culture and economic decay that may be better known in Europe than at home. With precise, witty color, he captures the morbid charm of “America’s Playground” on the Brooklyn beachfront, with its dilapidated amusement parks, made famous long ago in the black-and-white work of Diane Arbus, Weegee, and Bruce Gilden. Granser’s more recent tours, for which he has already received the Leica Oskar-Barnack Award, found sweaty beach bums and sailors in drag, shabby snack bars and rusty roller coasters, and recorded them all with a sympathetic eye to the aura of splendor gone seedy.“Recruiting Station” shows the rundown Army recruiter’s shack that stands in front of Nathan’s Hot Dogs, home of the annual hot-dog eating contest. Nearby, he captures hipsters in kneesocks and oversized sunglasses, and a view of the beach from an amusement-park ride high above it, with bathers small as little dots.
ISBN: 3775717765
Publisher: Hatje Cantz Publishers
Hardcover : 100 pages
Language: English