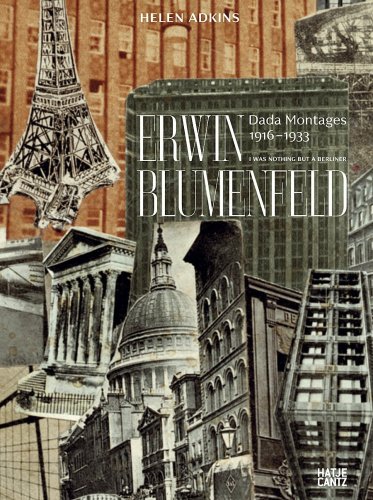 Erwin Blumenfeld: Nothing but a Berliner: Dada Montages 1916-1933
by Erwin Blumenfeld
Publisher's Description
Erwin Blumenfeld (1897-1969) was born into a Jewish family in Berlin. In 1941, after being interned in a concentration camp, he left Europe for the United States, where he eventually became a citizen; during the 40s and 50s, he was to make his name here as one of the most sought-after fashion photographers in the world. But most people are unfamiliar with Blumenfeld's early work, the often bitingly satiric Dada photomontages and collages he produced between 1916 and 1933. This book, put together by Helen Adkins, renowned expert on the Berlin Dada movement, is the first to provide a study and a survey of these early works. Blumenfeld did not intend for these works to be shown publicly, as they were primarily personal gifts to his friends and acquaintance, or were enclosed in love letters to his fiancée. Nonetheless, they were conceived in the Dada spirit (Blumenfeld established the Dutch branch of Dada in 1918) and belong to its story. Approximately 100 works-including many previously unpublished, which Adkins discovered in the artist's family archives and in other public and private collections-are examined within the context of Blumenfeld's life, photographs, drawings and literary works.
ISBN: 3775721274
Publisher: Hatje Cantz
Hardcover : 224 pages
Language: English
Dimensions: 8.4 x 10.9 x 1.1 inches