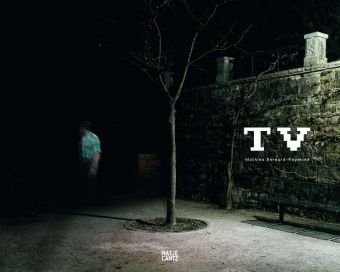 Mathieu Bernard-Reymond: TV
by Mathieu Bernard-Reymond
Publisher's Description
A seductive atmosphere redolent of cinema dominates the digital photo series TV by Mathieu Bernard-Reymond (*1976). Isolated people who seem to be threatened by an unidentifiable danger move along the streets at night. Only upon closer inspection does one realize that the artist has replaced the illuminated windows with television screens. The colorful screens do not allow anyone to look either in or out and are limited to just a few channels. And the “wild” creatures outside the buildings—such as animals of prey on the prowl, half-naked women, riot police, two boxers in the middle of a fight—are merely artificial in nature, constructed out of flickering, blurred television images.

Mathieu Bernard-Reymond’s disturbing photographs symbolize as palpably as they do impressively how—in a reality that is only conveyed through media—all of life ultimately dissolves into a mass of indistinguishable pixels.