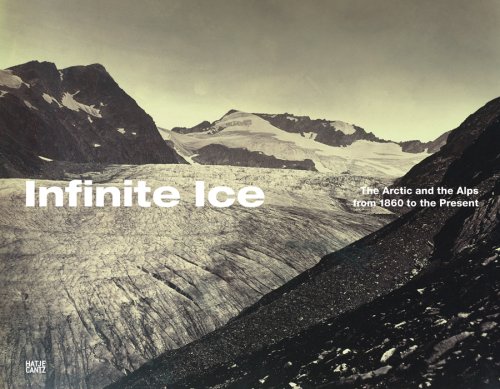 Infinite Ice: The Arctic and the Alps from 1860 to the Present
by Klaus Albrecht Schröder
Publisher's Description
A fascinating range of glacier images, from the pioneering days of photography to the present.

Photography’s immense potential for development became perceptible shortly after it was invented, and it could be seen in particular in series on glaciers and arctic landscapes. As early as the eighteen-sixties, photographers began connecting the aspect of (spatial) expanse to that of (temporal) change. Complementary views of polar landscapes taken during Arctic expeditions, showing them close up and from a distance, provided impressions of the depth and breadth of the topography. Glaciologists, on the other hand, needed to have photographs taken year after year in order to objectively assess the growth or contraction of the ice. What was also fascinating were stereoscopic images, with their three-dimensional effects created by putting together two simultaneous, but slightly staggered photographs: they permitted the viewer to get an almost immediate, physical sense of the incomprehensible expanses of ice. Ultimately, contemporary artists produced responses to these images: long, nighttime exposures by Darren Almond, aerial photographs by Olafur Eliasson, or Walter Niedermayr’s panoramas.