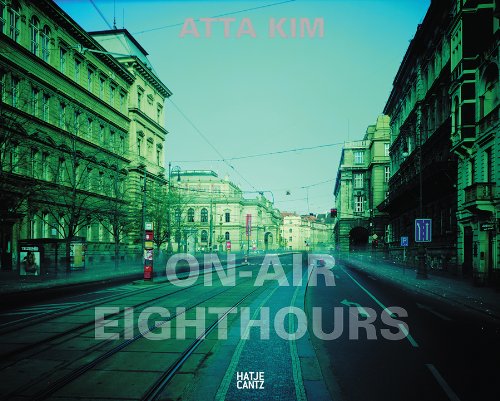 Atta Kim: On-Air Eighthours
by Atta Kim
Publisher's Description
Korean artist Atta Kim (*1956) is surely one of the country’s best known photographers. The ON-AIR project has been in progress since 2002. After Monologue of Ice and Superimposition, Eight Hours is the third body of work Kim has produced within the scope of the project. The photographs in Eight Hours are time-exposed images taken over a period of eight hours on eight-by-ten-inch film. The motifs are persons and objects inNew York, China, India, Prague, Berlin, and Paris who due to the long exposure time appear to disappear in proportion to the speed of their movement.

While Joseph Nicephore Niepce’s goal was to reproduce the urban landscape of Paris in his long-exposure photographs, Atta Kim uses an exposure time of eight hours to make things disappear. “All things eventually disappear” is the conceptual idea behind ON-AIR. It provides a haunting image of transience, and is a symbol of vanitas and, much like the Buddhist notion of anica, the impermanence of all existence.
ISBN: 3775723757
Publisher: Hatje Cantz
Hardcover : 168 pages
Language: English
Dimensions: 0 x 0 x 0 inches