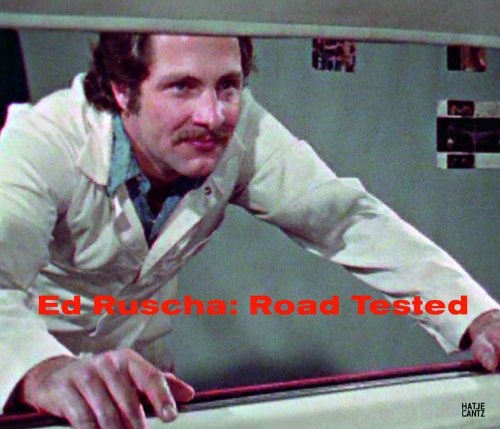 Ed Ruscha: Road Tested
by Michael Auping
Publisher's Description
Since his first road trip in 1956, driving from Oklahoma City to Los Angeles, Ed Ruscha has continued to muse on America as seen from the road: “I like being in the car, and seeing things from that vantage point,” he has said. Sometimes I give myself assignments to go out on the road and explore different ideas. My books are an example of that.” Consisting of around 75 works spanning the artist’s entire career, Ed Ruscha: Road Tested includes many of the famous aforementioned artist’s books, including Twenty-Six Gasoline Stations, Real Estate Opportunities, Some Los Angeles Apartments, Thirty-Four Parking Lots and the groundbreaking artist’s book Every Building on the Sunset Strip; some of Ruscha’s most iconic paintings, such as the “Standard Stations” and the “Hollywood Signs,” as well as paintings inspired by street names and road signs; and his exploration of the topography of greater Los Angeles in paintings that depict aerial grids of the city, as well as various southern California horizons and sunsets. Also examined here is the rarely seen Ruscha film Miracle (1975), which tells the story of a mechanic whose obsessive repair of the carburetor on a 1965 Mustang dooms his date with a beautiful woman. The first-ever treatment of a primary theme in the artist’s career, Road Tested at last gives Ed Ruscha his own road show.
ISBN: 3775728104
Publisher: Hatje Cantz
Hardcover : 128 pages
Language: English
Dimensions: 1.5 x 10 x 0.8 inches