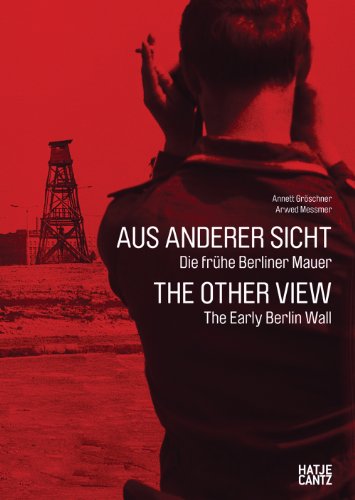 The Other View: The Early Berlin Wall (English and German Edition)
by Annett Gröschner
Publisher's Description
It was not until the seventies that the Berlin Wall started looking like the swath of white concrete that has been etched into collective memory. Before that, it consisted of brick walls, dog patrol areas, and barbed wire. In 1965 and 1066, soldiers from the East German border patrol photographed forty kilometers of the innercity Eastern wall, producing more than a thousand views toward West Berlin. Photographer Arwed Messmer (*1964 in Schopfheim, Germany) has digitally reconstructed these photographs to produce around three hundred panoramas, while author Annett Gröschner (*1964 in Magdeburg) has captioned them. Supplementing these “photo-text images” are portraits of soldiers, snapshots, and reports of escape attempts, which together provide an overview of everyday occurrences along the border. Essays on architecture and the changing shape of the Berlin Wall over the decades, on the Berlin Wall in literature, as well as on the importance of the project to the history of photography all open up a new perspective on the fascinating associations of a piece of architecture that stands like no other for the aberations the twentieth century. The project is supported by the Federal Archive, the Federal Foundation for Reviewing the GDR Dictatorship, and the Federal Cultural Foundation.
ISBN: 3775732071
Publisher: Hatje Cantz
Hardcover : 752 pages
Language: English
Dimensions: 8.5 x 12 x 1.9 inches