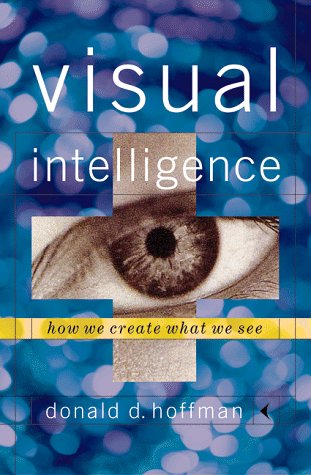 Visual Intelligence: How We Create What We See
by Donald David Hoffman
Publisher's Description
Drawing on his background as a professor of cognitive science, Hoffman presents a thorough account of the relationship between human vision and the brain and its implications on art and artmaking. It is well written and engaging
Amazon.com Review
Visual intelligence, cognitive scientist Donald Hoffman writes, is the power that people use to "construct an experience of objects out of colors, lines, and motions." And what an underappreciated ability it is, too; despite the fact that the visual process uses up a considerable chunk of our brainpower, we're only just learning how it works. Hoffman aptly demonstrates the mysterious constructive powers of our eye-brain machines using lots of simple drawings and diagrams to illustrate basic rules of the visual road. Many of the examples are familiar optical illusions--perspective-confounding cubes, a few lines that add up to a more complex shape than seems right. Hoffman also takes a cue from Oliver Sacks, employing anecdotes about people with various specific visual malfunctions to both further his mechanical explanation of visual intelligence and drive home how important this little-understood aspect of cognition can be in our lives. An especially intriguing example involves a boy, blind from birth, who is surgically given the power to see. At first, he is completely unable to visually distinguish objects familiar by touch, such as the cat and the dog. Other poignant examples show clearly how image construction is normally linked to our emotional well-being and sense of place. Visual Intelligence is a fascinating, confounding look (as it were) at an aspect of human physiology and psychology that very few of us think about much at all. --Therese Littleton
ISBN: 0393046699
Publisher: W W Norton & Co Inc
Hardcover : 294 pages
Language: English