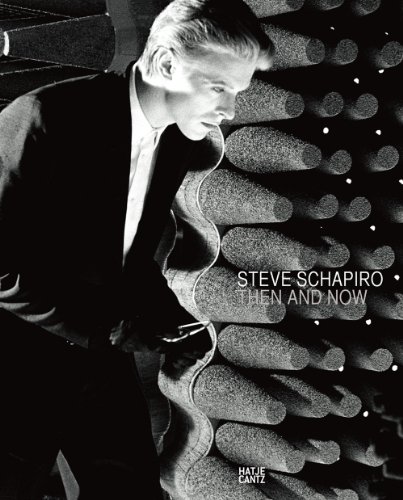 Steve Schapiro: Then and Now
by Matthias Harder
Publisher's Description
Robert Kennedy was the most imposing politician he ever met. And Johnny Depp is incredibly photogenic. Steve Schapiro (*1934 in Brooklyn) ought to know, because he has actually photographed them all: his expressive portraits of Martin Luther King, Jr., Muhammad Ali, Barbara Streisand, Marlon Brando, David Bowie, Jodie Foster, and Robert de Niro are part of our collective visual memory. Besides his work with the stars, Schapiro and his camera accompanied the greatest political and social upheavals of the sixties and seventies. These photographs have also achieved iconic status.

This volume includes a selection of photos taken over a period of more than fifty. In the accompanying essays, Schapiro explains how they were created, describing his experiences in a lively, humorous way. Along with previously unpublished photographs, the book also features new works by the timeless master.

Steve Schapiro (*1934 in Brooklyn) has not only taken portraits of prominent politicians such as Robert Kennedy, but of public figures such as Martin Luther King, Jr., as well as stars like Johnny Depp, David Bowie, Jodie Foster, and Robert de Niro. His pictures subtly reflect the social upheavals of the 1960s and ‘70s. The master photographer also has an eye for the quiet, hidden signs of the times. His camera focuses on scenes and people from everyday, ordinary life – for instance, the children pictured in our Collector’s Edition, photographed during Halloween in Brooklyn. Playing dress-up in the streets, they come to symbolize the paradoxes between authenticity and disguise, familiarity and anonymity in a metropolis.