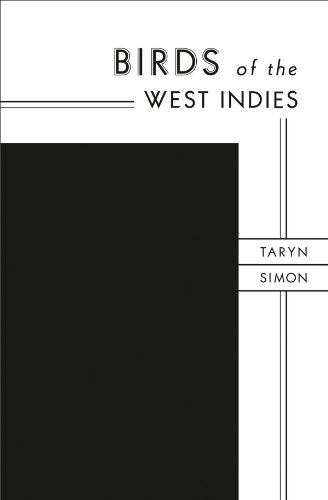 Taryn Simon: Birds of the West Indies
by Taryn Simon
Publisher's Description
In 1936, an ornithologist called James Bond released the definitive taxonomy of birds found in the Caribbean, titled Birds of the West Indies. Ian Fleming, an active bird watcher living in Jamaica, subsequently appropriated the name for his novel’s lead character. This co-opting of names was the first in a series of substitutions that would become central to the construction of the James Bond narrative. In a meticulous and comprehensive dissection of the Bond films, artist Taryn Simon inventoried women, weapons and vehicles, constant elements in the films between 1962 and 2012. The contents of these categories function as essential accessories to the narrative’s myth of the seductive, powerful and invincible western male. Maintaining the illusion the narrative relies upon––an ageless Bond, state-of-the-art weaponry, herculean vehicles and desirable women––requires constant replacements, and a contract exists between Bond and the viewer, which binds the narrative to that set of expectations. Continually satisfying those obligations allowed Bond to become a ubiquitous brand, a signifier to be activated with each subsequent novel and film. In Birds of the West Indies, Simon presents a visual database of interchangeable variables used in the production of fantasy, through which she examines the economic and emotional value generated by their repetition.
ISBN: 3775736638
Publisher: Hatje Cantz
Hardcover : 440 pages
Language: English
Dimensions: 0 x 0 x 0 inches