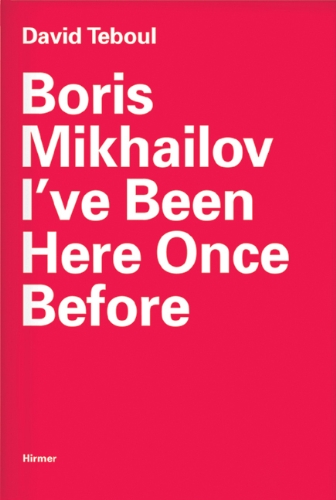 Boris Mikhailov: I've Been Here Once Before
by David Teboul
Publisher's Description
Seen through the eyes of filmmaker David Teboul—who completed a documentary about the artist in 2010—Boris Mikhailov: I’ve Been Here Before offers an overview of Ukrainian photographer Boris Mikhailov’s career. One of the most important artists to have emerged from the former Soviet Union, Mikhailov has for more than thirty years taken photographs that engage with the idea of the individual in the public sphere, as well as the breakup of the Soviet Union and its many human casualties. Extensively illustrated with stills from Teboul’s film, the book also includes transcripts of Mikhailov’s discussions with Teboul, in which he provides insight into both his work and, more generally, the life of an artist in the Soviet Union before and after its fall. This volume brings back into focus Mikhailov’s beautifully crafted and often melancholy body of work which was relatively unknown prior to the Soviet Union’s collapse.
ISBN: 3777440914
Publisher: Hirmer Publishers
Paperback : 476 pages
Language: English
Dimensions: 4.7 x 7.1 x 1.3 inches