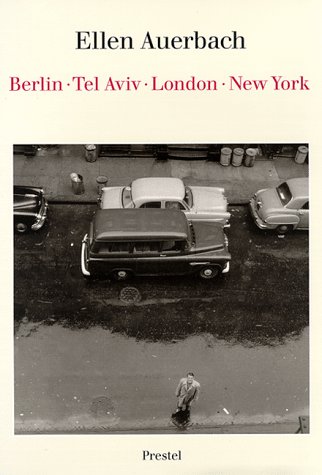 Ellen Auerbach: Berlin-Tel Aviv-London-New York (Art & Design)
by Ellen Auerbach
Publisher's Description
This first-ever retrospective of Ellen Auerbach's photography traces her beginnings at the Bauhaus, though her days with Grete Stern as ringl + pit, and her subsequent doceumentary photography of children in New York, Mexico, Norway, and Argentina. Her images are timeless in the great tradition of European street photography and though influenced heavily by the German avant garde of the 1920s, reveal a highly individual sense of beauty and narrative detail.
Amazon.com Review
Ellen Auerbach is a remarkable New York artist, honored in 1998 (at the age of 92) with an important exhibit of her photographs at Berlin's prestigious Academie der Kunst. Ellen Auerbach: Berlin, Tel Aviv, London, New York, the exhibition catalog, traces her trajectory through the century with photos she took between 1929 and 1965.

Some of her early images (created with studio partner Grete Stern) have a surrealist tinge. In 1933, Auberbach, a German Jew, fled to Palestine, where her photos captured the monumentality of landscape and the heroic power of childhood. One image, "Beach Near Tel Aviv 1934," shows a small boy standing proudly looking at a line of camels in the distance, reduced by the perspective to a string of toy-sized animals.

In 1937, Auerbach moved to America, though her view of her new homeland was apparently never rosy-eyed--a 1939 image depicts a framed photo of the Statue of Liberty in a junk shop, with a partly obliterated sign that reads "WE BUY" above it. However, her photos of American children showed increasing power and drama: a 1940 image, "Great Spruce Head Island, Maine," captures four kids looking out to sea, their body postures as harmonic and powerful as the famous combat photo "The Raising of the Flag at Iwo Jima." Another picture, "Robbie 1964," depicts a small boy looking out to sea with the solitary strength of a figure painted by Winslow Homer. Auerbach made photos of unassertive grandeur and emotional power, and her recognition in America is long overdue. Congratulations to Prestel for publishing this excellent book. --Benjamin Ivry