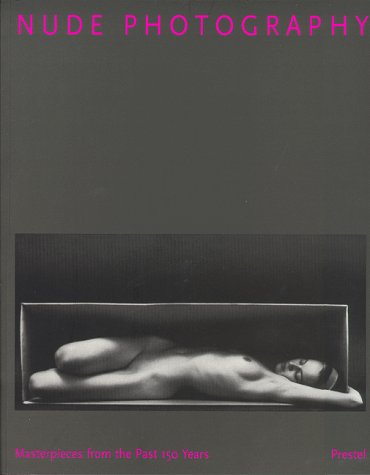 Nude Photography: Masterpieces from the Past 150 Years
by Peter-Cornell Richter
Publisher's Description
Starting with Daguerre himself, this ambitious anthology chronicles and illuminates the development of nude photography from its very beginnings. Richter has selected eighty masterworks--by artists as diverse as Stieglitz and Araki, Mapplethorpe and Man Ray, Levinthal and Weston--pairing each illustration with a short essay examining the photograph, its story, and its creator.
Amazon.com Review
This impeccable collection of mostly black-and-white masterworks from the last 150 years includes many familiar images, from Edward Steichen's Little Round Mirror, in which a soft-focus model strikes the classic contrapposto pose, to Man Ray's Violon d'Ingres, the long female seen from behind with that instrument's curve gracefully drawn on her back. But so many of the nudes of the last 150 years that are indelibly imprinted in our memories are missing: Weston's studies of his young son, or Imogen Cunningham's self-portraits in old age, or Brassaï's titillating shots of French prostitutes' derrieres, or Robert Mapplethorpe's black men. Rather than an inclusive compendium, this book is a kind of dreamy boy's book from another era, a semi-innocent collection of (mainly) breasts that any intelligent, sentimental male with an eye for feminine pulchritude will enjoy. With the exception of a little light bondage in David Levinthal's Desire series or a characteristically kinky moment from Duane Michals, this is almost a book you could tuck into the family art library.

Peter-Cornell Richter supplies a poetic description of each picture, deftly inserting a great deal of historical information in an affectionate, confidential tone. There are many memorable photographs, but one of the most illuminating is of the Modigliani model Jeanne Hébuterne. Her reclining body is the central subject of the shadowy image, but her face is arresting for its pronounced curves, tiny chin, and elongated nose and cheeks. Readers who have never seen her before will be struck at the reality Modigliani simply captured, when all along we thought he was working in the realm of abstract distortion.

A note: Of the 62 photographers represented here, 90 percent are men; of the 62 models used, 98 percent are women. --Peggy Moorman