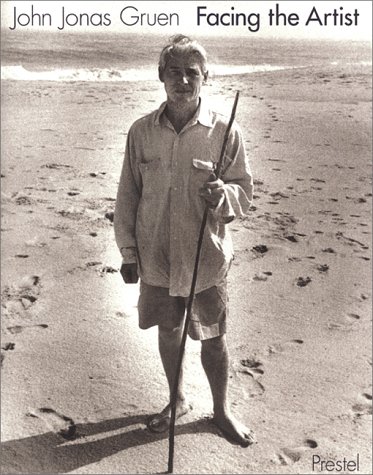 John Jonas Gruen: Facing the Artist
by John J. Gruen
Publisher's Description
Amazon.com Review
Facing the Artist is full of wonderful portraits of America's favorite artists. The cast of characters is diverse: more than 80 visual and performing artists including Leonard Bernstein and Yoko Ono, Jasper Johns and Felix Gonzalez-Torres. The book offers readers the voyeuristic pleasure of studying the images of artists whose work is familiar but whose faces may not be. What light does the almost-smiling visage of Richard Serra cloaked in a hooded sweatshirt shed on the tons and tons of steel he has twisted and torqued, leaned and planted around the world? Dapper David Hockney is perhaps unsurprisingly fabulous in saddle shoes, vest, three-button coat, sunglasses, and cigarette. Some portraits are funny, some severe, some melancholy, and some intimate. To these eyes, none of the other portraits surpasses that of Willem de Kooning. On the beach one day in 1959, John Jonas Gruen captured something essential about the artist with a photograph of de Kooning barefoot. The great painter stands in rumpled shorts and button-up shirt, holding a long walking stick. He is sad, serious, maybe ready to laugh, and above all else, handsome as hell.

Photographer Gruen has enjoyed a long career in and around the broader art world of New York City. During the 1950s he and his wife, Jane Wilson, were themselves the subjects of a great photographer--Diane Arbus shot them for a Harper's Bazaar feature on "New York's Most Glamorous Couples." And while working at the distinguished photo agency Rapho Guillumette, Gruen rubbed elbows with the likes of Man Ray and Robert Doisneau, so he is no stranger to art-world heavyweights. This book is composed of portraits Gruen made mostly during the '50s and '60s, but it includes recent work as well. The newer images are part of a project he has undertaken for the Whitney Museum to photograph artists whose works are part of the museum's permanent collection. --Loren E. Baldwin