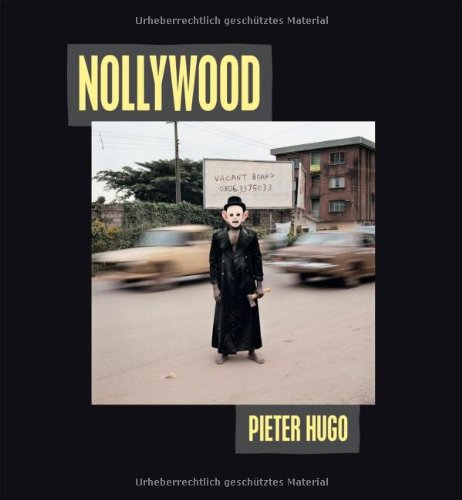 Nollywood
by Pieter Hugo
Publisher's Description
The Nigerian film industry is the third largest in the world, after those of the United States and India. Nigerian films often deal with the moral dilemmas facing modern Africans today and tell stories familiar to African families: of religion, violence, AIDS, and economic hardship. Much as he did with his previous book, the hugely successful The Hyena & Other Men, Pieter Hugo documents the intense and incredibly colorful world of Nollywood from an unusual angle. His images are staged representations of Nigerian film sets, featuring local actors who recreate themes and characters from Nollywood films: young men in military fatigues; witch doctors, healers and saints; hunters with their kill; prostitutes in their rooms. The result is a series of surreal tableaux rooted in local symbolic imagery. Accompanying the photographs are texts by Chris Abani, whose short fiction piece captures the chaos of the filmmaking process, and an essay by Zina Saro-Wiwa on Nollywood's explosive growth and what it means to Nigerians. Presented in a simple and restrained format, Hugo's gorgeous photographs reveal a little-known phenomenon to a wider audience.