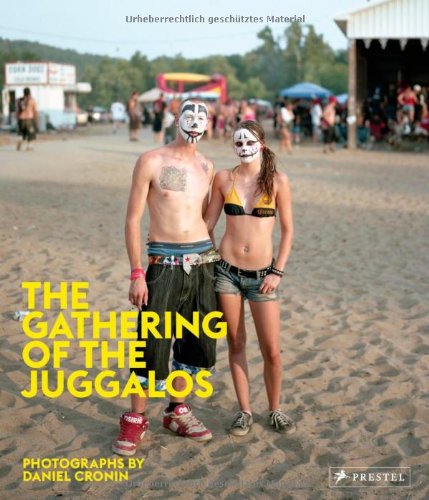 The Gathering of the Juggalos
by Camille Dodero
Publisher's Description
These unflinching portraits of Juggalos capture with honesty and sensitivity the community that makes up a vibrant American subculture. The Gathering of the Juggalos has been called the most controversial music festival in the world, headlined by the most hated band in the world, and attended by the most notorious subculture in the world. Each summer, thousands of Juggalos congregate at a privately owned campground, on the Illinois border of the Ohio River, to party. In an article in the Village Voice, Camille Dodero described the five-day festival as a 'shantytown psycho-porn amusement park.' Yet the Juggalos themselves, along with their leaders-notorious horrorcore rap group Insane Clown Posse-testify to the loyalty, goodwill, and camaraderie that emanate throughout the crowd. This intimate portrait of the Gathering presents Daniel Cronin's images of men, women, and children sitting in tents and cars, swimming in a brackish lake, painting each other's faces and, often, staring back at the camera communicating their defiance and pride.
ISBN: 3791347527
Publisher: Prestel
Hardcover : 104 pages
Language: English
Dimensions: 9.5 x 11 x 0.6 inches