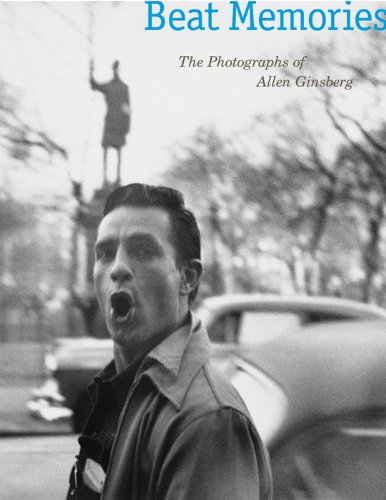 Beat Memories: The Photographs of Allen Ginsberg
by Thomas Gladysz
Publisher's Description
This intimate family album is a revealing photographic look at the Beat Generation as chronicled by the movement s great poet Allen Ginsberg. Allen Ginsberg began photographing in the late 1940s when he purchased a small, second-hand Kodak camera. For the next fifteen years he took photographs of himself, his friends, and lovers, including the writers and poets Jack Kerouac, William Burroughs, and Gregory Corso as well as Beat personality Neal Cassady. He abandoned photography in 1963 and took it up again in the 1980s, when he was encouraged by photographers Berenice Abbott and Robert Frank to reprint his earlier work and make new portraits; these included more images of longtime friends as well other acquaintances such as painters Larry Rivers and Francesco Clemente and musician Bob Dylan. Ginsberg's photographs form a compelling portrait of the Beat and counterculture generation from the 1950s to the 1990s. Far more than historical documents, his photographs and the extensive inscriptions he added to them years later preserve what he referred to as 'the sacredness of the moment,' the often joyous communion of friends and the poignancy of looking back to intensely felt times. More than seventy prints are brilliantly reproduced in this book and accompanied by Sarah Greenough's essay on Ginsberg's photography in relation to his poetry and other photographers of the time, a chronology of his photographic activity, and selections from interviews with Ginsberg between 1958 and 1996.
ISBN: 3791350528
Publisher: Prestel
Hardcover : 144 pages
Language: English
Dimensions: 9.1 x 11.6 x 0.9 inches