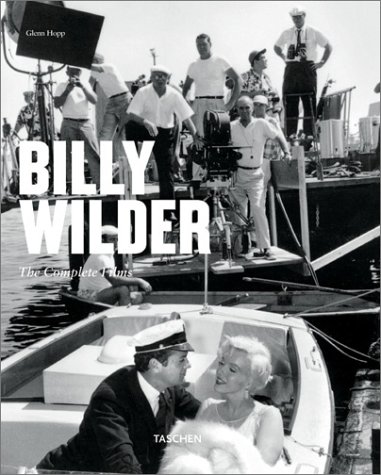 Billy Wilder:The Complete Films, The Cinema of Wit 1906 - 2002
by Glenn Hopp
Publisher's Description
'The only thing that bothers me more than not being taken seriously is being taken too seriously.' -Billy Wilder Billy Wilder (1906-2002) was American cinema’s greatest import. Hailing from Austria, Wilder arrived in Hollywood in 1935 and, with his skilled eye and sharp wit, took the town by storm. Exploring nearly all of the silver screen’s genres (slapstick comedy, eerie suspense, film noir, courtroom drama, romantic comedy…) and sometimes creating unheard-of genre cocktails (comedy and war in a Nazi prison camp in Stalag 17) he graced every film he directed with the inimitable and magical “Wilder touch.” That films like Sunset Boulevard, Witness for the Prosecution, Some Like it Hot, The Apartment, and Love in the Afternoon all hail from the same director/co-writer is a remarkable thing. With 26 films to his name, Billy Wilder was not only one of the greatest and most prolific filmmakers of all time but also the most versatile. TASCHEN's New Film Series For many years now, TASCHEN’s Basic Art books have been offering readers the opportunity to discover the world’s best artists for extremely modest prices. Now film buffs and moviegoers can have their cake and eat it too: compact yet highly detailed and superbly illustrated guides to cinema’s greatest directors and genres. • Updated flexi-cover format (slightly larger and thicker than the Basic Art series) • Each film by the director (or the best films of the genre for titles such as “Film Noir”) is examined and analyzed, accompanied by film stills and set photographs • Includes movie posters, bibliography, and complete filmography
ISBN: 3822815950
Publisher: Taschen
Paperback : 192 pages
Language: English
Dimensions: 8.3 x 10 x 0.7 inches