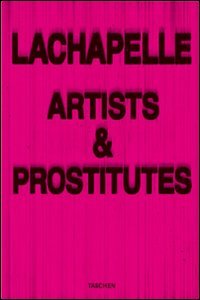 LaChapelle: Artists and Prostitutes
by David LaChapelle
Publisher's Description
Who’s the greatest star of star photography? It’s the inimitable David LaChapelle, the photographer whose singular style is perfectly unmistakable. He has photographed personalities as diverse as Tupac Shakur, Madonna, Amanda Lepore, Eminem, Philip Johnson, Lance Armstrong, Pamela Anderson, Lil’ Kim, Uma Thurman, Elizabeth Taylor, David Beckham, Paris Hilton, Leonardo DiCaprio, Hillary Clinton, Muhammad Ali, and Britney Spears, to name just a few. Once called the Fellini of photography, LaChapelle has worked for the most prestigious international publications and has been the subject of exhibitions in both commercial galleries and leading public institutions around the world.

Celebrating the visionary LaChapelle’s truly extraordinary photography, this 688-page, XL-sized book is packed cover-to-cover with vibrant full-bleed images; the best of his entire career to date. Bursting at the seams with spectacle and drama, and saturated with colors that only LaChapelle can realize, this limited edition pays tribute to the most daring and ambitious photographer in the history of portraiture.

Not yet out of high school, LaChapelle was offered his first professional job by Andy Warhol to shoot for Interview magazine. His photography has been showcased in numerous galleries and museums, including Staley-Wise; Tony Shafrazi Gallery and Deitch Projects in New York; the Fahey-Klein Gallery in California; Goss Gallery in Dallas; and internationally at Artmosphere in Vienna; Camerawork in Germany; Reflex Amsterdam; Maruani & Noirhomme in Belgium; Sozzani and Palazzo delle Esposizioni in Italy; and at the Barbican Museum in London, to this day the most attended show in the museum’s history. His unfettered images of celebrity and contemporary pop culture have appeared on and between the covers of magazines such as Italian Vogue, French Vogue, Vanity Fair, Rolling Stone and i-D.

In recent years LaChapelle has expanded his work to include music videos, live theatrical events and documentary film-making. His directing credits include music videos for artists such as Christina Aguilera, Moby, Jennifer Lopez, Britney Spears, The Vines and No Doubt. “It’s My Life” with Gwen Stefani won the award for Best Pop Video at the MTV Music Video Awards and LaChapelle himself garnered the MPVA’s Director of the Year award in 2004. His stage work includes Elton John’s The Red Piano, the Caesar’s Palace spectacular he designed and directed, and which was the top-selling show in Las Vegas for 2004. His burgeoning interest in film saw him make the short documentary Krumped, an award-winner at Sundance from which he developed RIZE, the feature film acquired for worldwide distribution by Lions Gate Films. The film was released in the U.S. and internationally in the Summer of 2005 to huge critical acclaim, and was chosen to open the 2005 Tribeca Film Festival in New York City. Ranked among the top ten “most important people in photography” by American Photo magazine, LaChapelle’s work continues to be inspired by everything from art history to pornography, creating both a record and mirror of all facets of popular culture today.

All color illustrations are color-separated and reproduced in Pan4C, the finest reproduction technique available today, which provides unequalled intensity and color range.