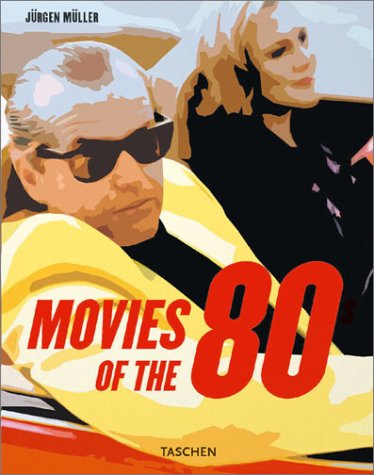 Movies of the 80s
by Jurgen Muller
Publisher's Description
Step right up and get your fill of 80s nostalgia with the movie bible to end all movie bibles. We’ve diligently compiled a list of 140 of the most influential movies of the 1980s that’s sure to please popcorn gobblers and highbrow chin-strokers alike. The 80s was a time for adventurers, an era of excess, pomp, and bravado. In the era when mullets and shoulder pads were all the rage, moviegoers got their kicks from flicks as wide-ranging as Blade Runner, Indiana Jones, When Harry Met Sally, and Blue Velvet. Without a doubt, sci-fi was the most important genre of the decade, with non-human characters like E.T. winning the hearts of millions while the slimy creatures from Aliens became the stuff of nightmares and movies like Ghostbusters and Back to the Future fused comedy and sci-fi to the delight of audiences everywhere. In fact, the 1980s saw the invention of a new reality, a movie-world so convincingly real—no matter now far-fetched—that spectators could not help but abandon themselves to it. Now that’s entertainment, folks. Features: * Cast/crew listings * Box office figures * Trivia * Film stills * Useful information on technical stuff * Actor and director bios * Academy Awards list The editor: Jürgen Müller, born 1961, studied art history in Bochum, Paris, Pisa, and Amsterdam. He has worked as an art critic, a curator of numerous exhibitions, a visiting professor at various universities, and has published books and numerous articles on topics dealing with the history of art and the cinema. He currently teaches art history at the Universität der Künste in Berlin. He lives in Hamburg and Berlin.
ISBN: 3822817376
Publisher: Taschen
Paperback : 861 pages
Language: English