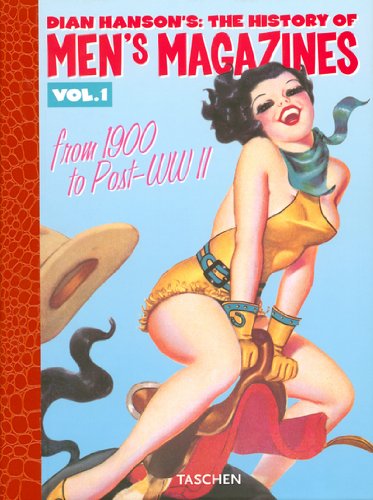 History of Men's Magazines, Vol. 1 (Dian Hanson's The History of Men's Magazines)
by Dian Hanson
Publisher's Description
Open your notebooks, sharpen your pencils, and get ready for a history lesson like none you’ve ever experienced. You’re about to learn everything you could ever want to know about the world history of men’s magazines—not magazines about sports, not fashion, not hunting or fishing or how to build a birdhouse in ten easy steps, but those titillating periodicals embracing the subject dearest to all heterosexual men’s hearts and other body parts: the undraped female form. Former men’s magazine editor Dian Hanson traces its development from 1900 to 1980 in six massive and informative volumes.

In 460 full-color pages you’ll learn how the first magazines appeared around 1900 in France, Germany and the US. Then follow along through the timid teens, the decadent twenties, the desperate thirties through the war and reconstruction. Covered in Volume 1 are men’s magazines masquerading as movie magazines, humor magazines, detective magazines, art magazines, nudist magazines, and “spicy” fiction, as well as items like the Tijuana Bibles that pretended nothing and made no excuses. This hardcover volume is a fascinating instant collectable all on its own, and a must have to complete the six volume set of Dian Hanson’s: The History of Men’s Magazines.

Dian Hanson is a twenty-five-year veteran of men’s magazine publishing. She began her career at Puritan Magazine in 1976 and went on to edit a variety of titles, including Partner, Oui, Hooker, Outlaw Biker, and Juggs magazines. In 1987 she took over the ‘60s title Leg Show and transformed it into the world’s best-selling fetish publication. Most recently, she authored TASCHEN’s Terryworld, Tom of Finland: The Comic Collection and Dian Hanson’s: The History of Men’s Magazines six-volume set.
ISBN: 3822822299
Publisher: Taschen
Hardcover : 460 pages
Language: German
Dimensions: 8.7 x 10.9 x 1.7 inches