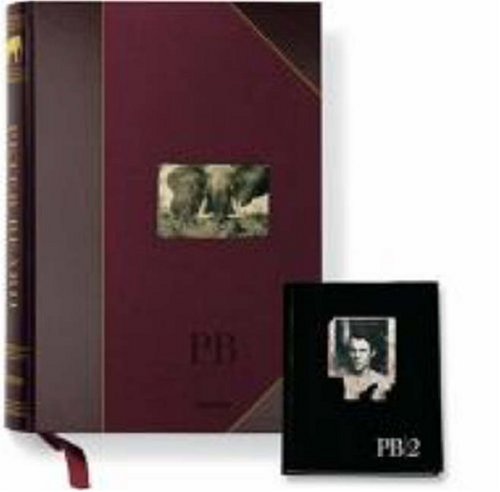 Peter Beard: Art Edition, Signed and Numbered from 251 to 2500 (Taschen Artist's Edition)
by Peter H. Beard
Publisher's Description
The most poignant are the ones of decomposing elephants where, over time, as they disintegrate, the bones form magnificent sculpture—sculpture which is not just abstract form but has all the memory traces of life, despair and futility. — Francis Bacon on Peter Beard’s photographs

Photographer, collector, diarist, and writer of books Peter Beard has fashioned his life into a work of art; the illustrated diaries he kept from a young age evolved into a serious career as an artist and earned him a central position in the international art world. He was painted by Francis Bacon, painted on by Salvador Dalí, and made diaries with Andy Warhol; he toured with Truman Capote and the Rolling Stones, created books with Jacqueline Onassis and Mick Jagger—all of whom are brought to life, literally and figuratively, in his work. As a fashion photographer, he took Vogue stars like Veruschka to Africa and brought new ones—most notably Iman—back to the U.S. with him. His love affair with natural history and wildlife, which informs most of his work, began when he was a teenager. He had read the books of Isak Dinesen (Karen Blixen) and after spending time in Kenya and befriending the author, bought a piece of land near hers. It was the early 1960s and the big game hunters led safaris, with all the colonial elements Beard had read about in Out of Africa characterizing the open life and landscape, but the times were changing. Beard witnessed the dawn of Kenya’s population explosion, which challenged finite resources and stressed animal populations—including the starving elephants of Tsavo, dying by the tens of thousands in a wasteland of eaten trees. So he documented what he saw—with diaries, photographs, and collages. He went against the wind in publishing unique and sometimes shocking books of these works. The corpses were laid bare; the facts were carefully written down sometimes in type, often by hand, occasionally with blood.

Spilling out over the pages of this massive tome, Peter Beard’s collages are reproduced as a group for the first time at the size they have always meant to be seen, many of them as foldouts. Hundreds of smaller-scale works and diaries fill the remaining spreads—magnified to show every detail, form Beard’s meticulous handwriting and old-master-inspired drawings to stones and bones and bits of animals pasted to the page. Available in both Art and Collector’s editions, this opulent and beautifully crafted limited edition—complete with wooden stand — is a work of art in itself.

Born in New York City, Peter Beard (born 1938) began keeping diaries and taking photographs as an adolescent. After graduating from Yale, he developed a keen interest in Africa; in the early 1960s he worked at Kenya’s Tsavo National Park, during which time he photographed and documented the demise of over 35,000 elephants and published his first book, The End of the Game. His first show at Blum Helman Gallery came in 1975, and was followed in 1977 by the landmark installation of elephant carcasses, burned diaries, taxidermy, African artifacts, books and personal memorabilia at New York’s International Center for Photography. In addition to creating original artwork, Beard has also worked as a fashion photographer and collaborated on projects with Andy Warhol, Andrew Wyeth, Richard Lindner, Terry Southern, Truman Capote, and Francis Bacon. In 1996, shortly after Beard was trampled by an elephant, his first major retrospective opened at the Centre National de la Photographie in Paris, France, followed by others in Berlin, London, Toronto, Madrid, Milan, Tokyo, and Vienna. He now lives in New York City, Montauk Point, and Kenya with his wife Nejma and daughter Zara.
ISBN: 3822826065
Publisher: Taschen
Hardcover : 616 pages
Language: English