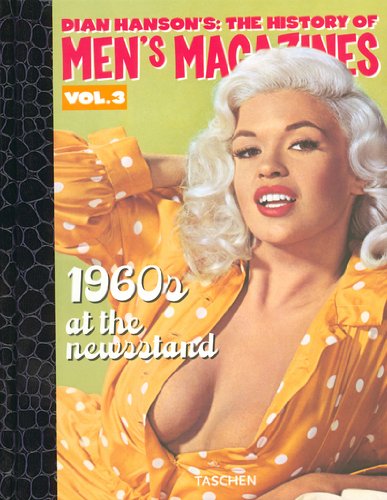 Volume 3 begins with an explosion of new American men’s magazines following the redefinition of US obscenity laws in the late fifties. We examine the enormous impact of Playboy, not only on American titles, but on magazines worldwide. This is the decade when France finally declines as a great force in magazine production; England starts to show her pervy side; Argentina embraces burlesque; and Germany once again blends political activism with nudity. By 1965 even Australia has a booming men’s magazine industry. The volume ends with a look at those great back-of-the-magazine ads for party pills and the first inflatable “dates”.

The History of Men’s Magazines, Volume 3 contains over 400 full color pages of vintage covers and interiors and a well-researched text profiling quirky publishers and artists, individual magazines, and the place of it all in the Swinging Sixties culture.
ISBN: 3822829765
Publisher: Taschen
Hardcover : 460 pages
Language: German
Dimensions: 8.6 x 10.9 x 1.7 inches