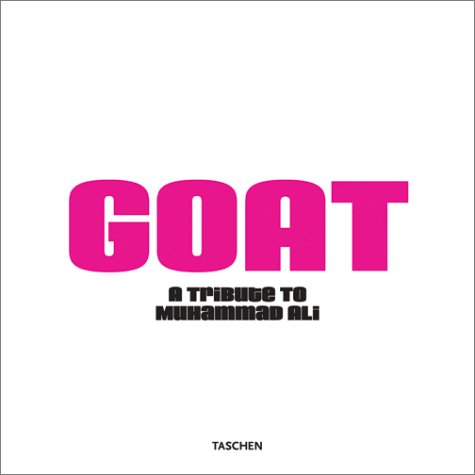 Goat: A Tribute to Muhammad Ali
by Benedikt Taschen
Publisher's Description
'You know what, Benedikt? Something about Ali might be interesting,' art dealer Max Hetzler said to me one day. 'We know he's a legend, but these days, he's something of a mystic and holy man also.' - Benedikt Taschen Muhammad Ali is one of the most remarkable personalities of our time and the greatest sportsman to ever walk the earth. To honor this living legend, TASCHEN has created a work that is both epic in scale and just as unique and vibrant as the man himself. It is more than appropriate that a worthy tribute to his life would reflect the scale of his achievements, and 'GOAT - Greatest of All Time' proves itself up to the task. Four years in the making, and the most comprehensive look at Ali to date, 'GOAT' tips the scales at 34 kgs (75 lbs) and is 50 cm x 50 cm (20in. x 20in.) in size. 800 pages of archival and original photographs, graphic artwork and articles and essays - many of them previously unpublished - chronicle six decades of his life in stunning detail. To cap it all, the project takes place with the participation of Ali himself and those members of his inner circle who have been closest to him over the years: from managers and key ringside cornermen to friends, family and children; from spiritual and other advisers to broadcasters, essayists and journalists. Motivating this endeavor is the conviction that Ali is not just a figure from the past, but one whose influence pervades everyday popular culture, even now. A mere glance at the world of sports and music, for example, reveals his psychic DNA on everything from the lyrics and style of rap music to the way sports figures represent themselves. More significantly, his actions outside of the boxing ring still speak louder than the verbal outrageousness of his pre-fight spectacles. He is a man who stood by his convictions, took a highly unpopular stance at the peak of his career in a country not yet ready for radical change. He risked everything - his boxing license, livelihood, and tremendous popularity - and lost everything, and in the process began to emerge as a hero for all time. No stone has been left unturned in telling this remarkable story: the book features written contributions from hundreds of writers and photographers, as well as over 3,000 photographs of Ali's dazzling life. Plus Ali's own insights, writings and drawings, and reproductions of fight posters and classic memorabilia. After the enormous success of Helmut Newton's megabook, 'SUMO', publisher Benedikt Taschen felt that his next challenge lay in creating a work that had multiple sources and extraordinary photography, but one where the emphasis on the written word, narrative and research was on par with that of the most comprehensive literary biographies. In short, matching meticulously crafted prose with incredible color and black-and-white photography. In addition, new work - commissioned from artist Jeff Koons - gives the Ali mythology a twenty-first-century edge and an entirely contemporary context. 'GOAT' will come in two versions: the 'Champ's Edition', limited to the first 1,000 copies and featuring a specially-commissioned congenial multiple by Jeff Koons as well as four silver gelatin prints by Howard L. Bingham, signed by the photographer and Ali himself. The remaining 9,000 copies come with a photo-litho made by Jeff Koons. All 10,000 copies are individually signed by Muhammad Ali and Jeff Koons.
ISBN: 3822830682
Publisher: Taschen
Hardcover : 780 pages
Language: English