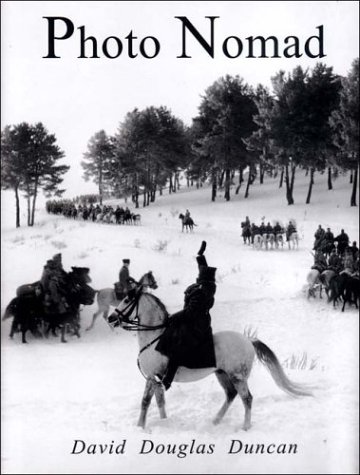 Photo Nomad
by David Douglas Duncan
Publisher's Description
A unique autobiography in images from seven decades of Duncan's photographic career. The legendary photographs of David Douglas Duncan explore the broad range of human nature, from the most quiet notes of life to the crashing crescendos of war. Duncan began taking pictures for newspapers in the mid-1930s, then joined the Marines, where he produced some of the most moving images of World War II. With Life magazine, he documented the end of British rule in India and covered conflicts in Europe, Africa, the Middle East, and Korea with clarity and compassion. Returning to the battlefield with the escalation of war in Vietnam, he produced two more books that became icons of the American soldiers' experience. Since then, he has produced books on such diverse subjects as Picasso's making of a painting to the sunflowers of France, with forays into the world of tragic personal loss. Still exuberant in his eighth decade. Duncan's keen eye and heart continue to illuminate the human experience.
ISBN: 0393058611
Publisher: W. W. Norton & Company
Hardcover : 464 pages
Language: English
Dimensions: 7.2 x 9.4 x 1.5 inches