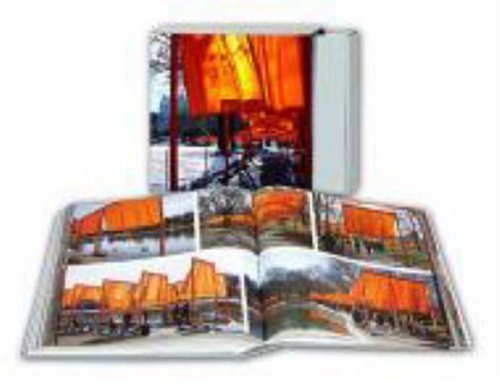 Christo and Jeanne-Claude: The Gates: Central Park, New York City 1979-2005
by Wolfgang Volz
Publisher's Description
February 2005 marked the ephemeral installation of a monumental work of art by Christo and Jeanne-Claude in New York City`s Central Park. First conceived in 1979 and rejected by New York City government in 1981, the project was approved by Mayor Michael Bloomberg`s administration in 2003. The work of art consisted of 7503 16-foot-high vinyl gates with saffron-colored fabric panels on twenty-three miles of the Park`s walkways. Seen from the buildings surrounding the Park, The Gates looked like a saffron flowing river, while those walking through them experienced the ambience of a fluid golden ceiling. Financed entirely by Christo and Jeanne-Claude through their C.V.J. Corporation, The Gates were assembled and installed by thousands of paid workers. Completed on February 12, 2005, The Gates remained in place for sixteen days, after which they were removed and the materials recycled. The work of art was free for all visitors, who continued to use Central Park during the whole process. This historic event provided a memorable and joyous experience for New Yorkers and visitors.

This special collector`s volume documents the entire project from conception to realization. Designed by Christo and Jeanne-Claude, with texts by Jonathan Henery and photographs by exclusive photographer Wolfgang Volz, this limited-edition volume is the ultimate book object for fans and collectors who want a lasting and unique souvenir of this remarkable work of art.

* The Collector`s Edition is limited to 5,000 copies, signed and numbered by Christo and Jeanne-Claude and Wolfgang Volz. * Each copy comes with a 24 x 24 cm (9.4 x 9.4 in.) piece of the fabric used for the work of art * Contains 104 preparatory drawings and collages, as well as 900 important documents, engineering drawings, technical data, maps, and 1,441 photographs from 1979 to 2005. * The third volume in our Christo and Jeanne-Claude collector`s series, complementing Wrapped Reichstag, Berlin, and The Umbrellas, Japan–USA.
Amazon.com Review
Famous for massive public art projects, including "Wrapped Coast, One Million Square Feet" in Australia and "Running Fence" in Northern California, Christo Javacheff and his wife Jeanne-Claude were used to dealing with intransigent bureaucracies. But they hadn't reckoned with New York City. The couple's 1979 project--temporarily placing thousands of saffron-colored banners across the walkways of 843-acre Central Park--did not receive the city's blessing until 2003. Published in advance of the 16-day installation in February 2005, Christo and Jeanne-Claude: The Gates is a picture book that moves briskly from photographs of early presentations and hearings to numerous shots of workers assembling the steel, aluminum, vinyl and rip-stop nylon components of the piece. Scattered throughout are many of Christo's vibrant color sketches of "The Gates," which were conceived to create a "golden river" suggestive of autumn foliage when viewed from neighboring buildings and a "golden ceiling" for walkers and joggers in the park. The banners billow in the breeze, like sheets on a clothesline. While the early drawings show long banners hung from spindly black frames driven into the earth, the final design had to be modified so that it wouldn't touch low-hanging tree branches or poke holes in the ground. In the final version, 16-foot banners hang from sturdy aluminum bases covered in orange vinyl and placed at 12-foot intervals along 23 miles of walkways. The most recent drawings are especially radiant, showing the orange banners against a wintry setting of leafless trees. However, the decision to install "The Gates" in February—typically a dead time for tourism in the city—was likely driven by more than artistic effect. Taschen plans to publish a second edition of this book, with an additional 32 pages showing the final installation of "The Gates." Perhaps the publisher will also add much-needed artistic and socio-political context about the development of this project and how it compares with the artists' other work. --Cathy Curtis
ISBN: 3822835625
Publisher: Taschen
Hardcover : 967 pages
Language: English
Dimensions: 14.1 x 12.4 x 3.2 inches