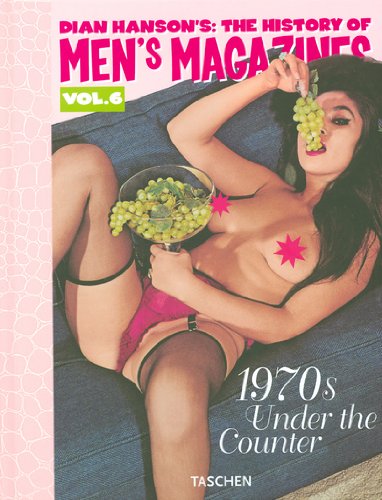 History of Men's Magazines: 1970's Under The Counter Vol. 6
by Dian Hanson
Publisher's Description
Volume 6, the final word in the encyclopedic series The History of Men's Magazines, is reserved for the most daring and extreme edges of the publishing field. In the late 1960s adult bookstores and sex shops spread across Northern Europe and North America to house an increasingly explicit crop of magazines resulting from the international sexual revolution. Magazines sold on the newsstand had to conform to mass taste and morality, but in the sex shops the only limits were imagination. In the 1970s, drunk on freedom, editor's imaginations ran wild. Come peek inside the sex shops of Denmark, Sweden, Germany, Holland and the US to see what liberation really meant. Read about Berth Milton, the man who toppled Sweden's obscenity laws with his magazine Private; the Danish Theander brothers whose motto was, 'The First, The Biggest, The Most Pornographic'; Reuben Sturman, founding father of Southern California's vast sex industry; John Sutcliffe, who made gasmasks sexy with his Atomage magazine; and worst film director Ed Wood Jr.'s secret and surprising men's magazines.