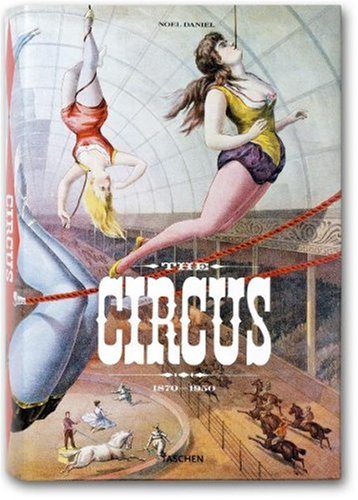 The Circus: 1870-1950
by Noel Daniel
Publisher's Description
During its heyday one hundred years ago, the American circus was the largest show-biz industry the world had ever seen. From the mid-1800s to mid-1900s, traveling American circuses performed for audiences of up to 14,000 per show, employed as many as 1,600 men and women, and crisscrossed the country on 20,000 miles of railroad in one season alone. The spectacle of death-defying daredevils, strapping super-heroes and scantily-clad starlets, fearless animal trainers, and startling freaks gripped the American imagination, outshining theater, vaudeville, comedy, and minstrel shows of its day, and ultimately paved the way for film and television to take root in the modern era. Long before the Beat generation made “on the road” expeditions popular, the circus personified the experience and offered many young Americans the dream of adventure, reinvention, and excitement.

With 670 pages and nearly 900 color and black-and-white illustrations, this book brings to life the grit and glamour behind the circus phenomenon. Images include photographic gems by key early circus photographers such as Frederick Whitman Glasier and Edward Kelty, about 180 of the earliest color photographs ever taken of the circus from the 1940s and 1950s, 200 posters by the famous Strobridge lithographers, iconic circus photographs by Mathew Brady, Cornell Capa, Walker Evans, Weegee, Lisette Model, and little-known circus images by Stanley Kubrick and Charles and Ray Eames; also included are rare color and black-and-white lithographs and engravings from the 16th–19th centuries illustrating the worldwide roots of the circus, as well as original sideshow banners by legendary sideshow banner artists Nieman Eisman, Fred G. Johnson, and David “Snap” Wyatt.

Organized into nine thematic chapters, the book sheds new light on circus history, from a behind-the-scenes look at life on the move, to the freedoms enjoyed by early female performers, to the innovative production skills that demanded as much know-how as a modern-day film production. For the first time ever, contemporary readers can now experience the legend of the American circus in full effect. The book’s broad subject matter, riveting images, and diverse visual material will appeal both to the circus aficionado and those who have never before been to circus.
ISBN: 3822851531
Publisher: Taschen
Hardcover : 670 pages
Language: French
Dimensions: 13.4 x 20.3 x 3.7 inches