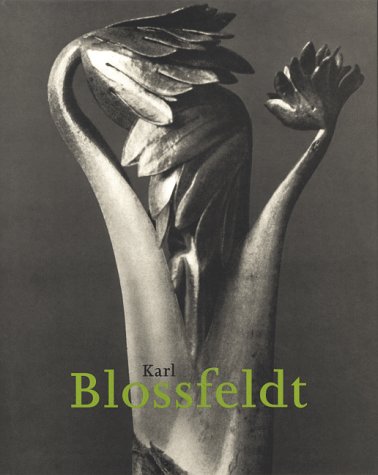 Karl Blossfeldt, 1865-1932
by Karl Blossfeldt
Publisher's Description
The complete reprint of Blossfeldt's three published works, with text by noted scholar Hans Christian Adam, is an excellent repository of the photographer's serenely beautiful work. Intended as inspiration for industrial engineers, Blossfeldt's thousands of photographs depict the amazing diversity of forms in the natural world.

Amazon.com Review
When Karl Blossfeldt published Art Forms in Nature in 1928, he made photographic history and became an instant celebrity. The public loved the world of tiny shapes and organic monumentality revealed in his enlargements of flowers and seeds, stems and leaves. Yet Blossfeldt did not consider himself a photographer. He produced his beautiful studies of plant forms to illustrate the courses he taught on architecture at Berlin's School of Arts and Crafts. For 30 years he used the same painstaking method. He would make long journeys into the countryside to select his specimens, which tended to be hardy weeds rather than cultivated flowers. He then prepared them against a neutral cardboard background in various ways designed to avoid camera shake, then photographed in extreme close-up with a homemade plate camera equipped with a very long bellows. Plants gave Blossfeldt a constant supply of graceful designs in which organic growth modified the basic symmetry of natural forms. Unfurling ferns resemble Gothic tracery or a bishop's crosier, a seed pod suggests a medieval weapon, reed stems look like skyscrapers. This beautifully produced book contains 348 illustrations, including all of the plates in Blossfeldt's three books of 1928, 1932, and 1942 plus 30 large unpublished images made in his childhood home in the Harz Mountains of Germany. Blossfeldt's visual discoveries transport viewers into a fairyland of art deco patterns and shapes; every page of this book is a delightful surprise. If there is a gardener in your life, this is the perfect gift. --John Stevenson
ISBN: 3822874388
Publisher: Taschen
Hardcover : 360 pages
Language: English
Dimensions: 10.7 x 13.1 x 1.4 inches