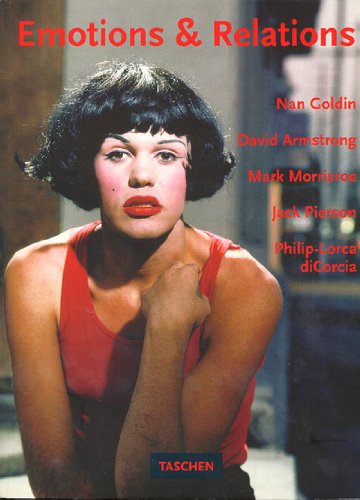 Emotions & Relations: Nan Goldin, David Armstrong, Mark Morrisroe, Jack Pierson, Philip-Lorca Dicorcia (Foto Series)
by Hamburger Kunsthalle
Publisher's Description
Uniting the five leading lights of the Boston School of American photography, this is a showcase for some of the most striking and compelling imagery on the contemporary scene. Drawing on a similar range of influences -- fashion's studied glamour, Larry Clark's haunting lowlife, and the casual beauty of the snapshot -- all five contributors realise their visions in contrasting and highly idiosyncratic ways. Nan Goldin is famous for her sexually polymorphous subjects, the way she transforms her models into Warholesque "superstars", and her keen sense of irony and humour. Intimate Goldin associate David Armstrong works with stark black and white portraits of confession and loss. Mark Morrisroe is the tragic figure of the group, who died of AIDS age 30, a dark romantic whose work combined narcissism and explicit poetry. Jack Pierson is an impressionist, for him the photograph is a postcard sent from a "pure moment". Working through an obsession with television imagery, Philip-Lorca DiCorcia stages and composes his models into images of mediated desire. This is the photography of a generation raised on television and chemicals, a stunning documentation of friendship, lust and love at the end of the millennium.
ISBN: 3822875074
Publisher: Taschen
Paperback : 200 pages
Language: English
Dimensions: 0 x 0 x 0 inches