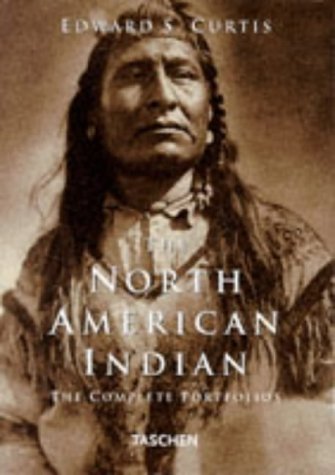 The North American Indian: The Complete Portfolios
by Hans Christian Adam
Publisher's Description
Between 1907 and 1930 Edward Sheriff Curtis produced twenty sumptuous portfolios documenting the North American Indian. Though his work began from fear that the Native Americans were dying out, he soon discovered a richness and vitality that had survived into the twentieth century, persevering on the reservations. His appreciation of the many native cultures of the continent is remarkable, as is his sober yet romantic vision of the spirituality of their lives. The artistic quality of these images, which are also a uniquely valuable anthropolgical record, makes The North American Indian one of our finest national treasures. This affordable Taschen reprint, presenting the complete twenty volumes in one anthology, belongs in every photography collection.
Amazon.com Review
Originally used to illustrate a 20-volume encyclopedia of Native American history and culture, these photographs from the first decades of the 20th century are a valuable document of history. From a striking 1905 portrait of Geronimo to the seal-hunting Eskimos of Nunivak Island, Edward S. Curtis's pictures reflect the diversity of cultures that existed among the various Indian tribes. Their quality is superb--Curtis used the then-state-of-the-art photogravure process to reproduce his images--and the 1906 critique from Theodore Roosevelt remains valid: "In Mr. Curtis we have both an artist and a trained observer ... whose work has far more than mere accuracy, because it is truthful."
ISBN: 382288183X
Publisher: Taschen
Paperback : 768 pages
Language: English