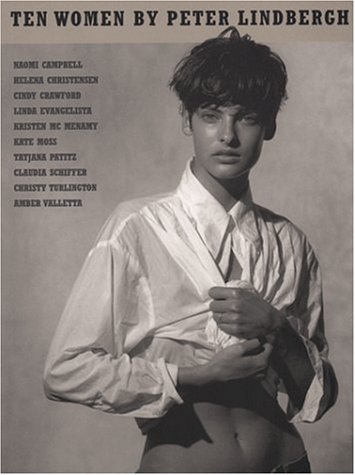 10 Women
by Karl Langerfeld
Amazon.com Review
The 10 supermodels in the photographs on these pages are extraordinary, extended earthlings who look as if they've been pulled at both ends like saltwater taffy. If the book title seems to suggest that it is the ambitious photographer, fashion shutterbug Peter Lindbergh, who created them rather than they who inspired him with their raw material, well, let him dream. His 108 sensual and appreciative black-and-white photos do beautiful justice to these stunning young women. The only exception is Cindy Crawford, who looks zipper-lipped and white-bread American next to the likes of Helena Christensen, Naomi Campbell, Linda Evangelista, Tatjana Patitz, the adorable Claudia Sizzler--Schiffer--and Amber Valletta (who, for some reason, is always called "androgynous"). At 22, Valletta looks tired, as usual, but her gender identity is awfully clear. But let's not quibble; even Crawford is drop-dead gorgeous. It's easy to see why Lindbergh has been chosen so often to direct ad campaigns for top designers (including Karl Lagerfeld, who contributed an introduction to this book).

There is one color shot here, a delicate ad for Kate Moss's right nipple, apparently, as she reclines in spike-heeled, ice-white leather boots on a snowy polar bear skin that has a soft, fake look to it. But, as with most supermodel breasts, hers and those of the other cavorters in this freewheeling book leave the viewer a bit cold. Only Naomi Campbell, with her high-IQ-enhanced smile, exudes a deeper eros. Which makes one think again about who is by whom; perhaps it is Lindbergh, after all, with his gift for stark, '30s-inspired, Garboesque chiaroscuro, who has brought these posers' beauty into such striking focus. --Peggy Moorman