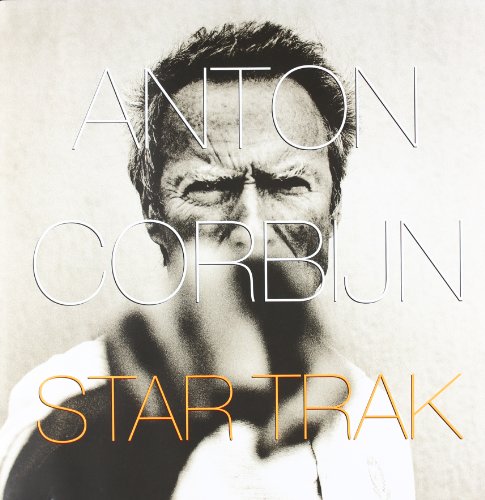 Anton Corbijn: Star Trak
by Anton Corbijn
Publisher's Description
Anton Corbijn initiated a new era in portrait photography for the rock and pop music scene with his atmospheric, often melancholy images. One of his unmistakable qualities is his ability to see directly through his subject's masquerades. Taken primarily in black & white, most of Corbijn’s photographs are shot in those quiet moments between performances.

Corbijn has moved beyond the boundaries of music photography and Star Trak reads like a visual encyclopedia of the icons of our culture. From film directors like Wim Wenders, David Lynch, and Martin Scorsese to actors like Johnny Depp, Gerard Depardieu and Jodie Foster, and including such familiar faces like Mick Jagger, Kurt Cobain, and William S. Burroughs, Corbijn takes us through the looking glass to redefine the character of today's cult heroes.
Amazon.com Review
Anton Corbijn has "a reluctance to impose" on his subjects that they admire, "a way of making you feel that you wouldn't mind experimentally making an arse of yourself--because he doesn't either," says Brian Eno, whose eerie portrait is one of the more arresting images in this collection of Corbijn's work. There are some powerful photographs here--Sinead O'Connor, David Byrne, William S. Burroughs--that stand as testament to the portraitist's talents. His use of color is beautifully surreal, but most of his pictures are black and white. Some are decidedly unflattering: Johnny Cash looks like a cadaver, Neil Young like an ex-con who could use a kind word. Some are playful, such as those of Mick Jagger cavorting in a pair of masks. The majority of Corbijn's photographs are raw and unsettling; few are possible to ignore.
ISBN: 3829600569
Publisher: Schirmer/Mosel Verlag Gmbh
Hardcover : 144 pages
Language: German
Dimensions: 12 x 12.4 x 0 inches