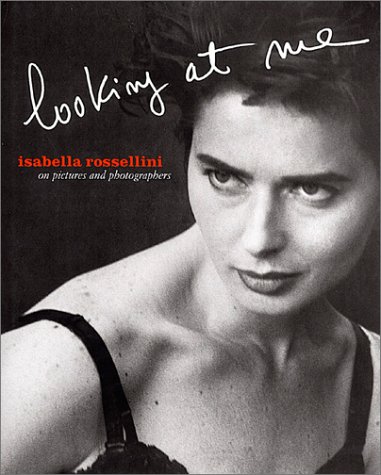 Self-reflection by celebrities tends to be fraught with unmentionable difficulties. Not, though, when the star in question is the ever intelligent, self-aware, articulate, and magnificent Isabella Rossellini. For years, a wall in the entrance of Rossellini's apartment has been covered in pictures taken of her by different photographers. Looking at the Me Wall, Rossellini writes that she never really saw herself, instead she saw the photographer's work, their ideas, and our collaboration in capturing fantasies. Looking at Me gathers together Rossellini's private collection of portraits taken of herself by some of the world's leading photographers, including Eve Arnold, Richard Avedon, Michel Comte, Patrick Demarchelier, Fabrizio Ferri, Horst P. Horst, Brigitte Lacombe, Annie Leibovitz, Peter Lindbergh, Robert Mapplethorpe, Steven Meisel, Irving Penn, Herb Ritts, Paolo Roversi, Ellen von Unwerth, and Bruce Weber, as well as filmmakers David Lynch and Wim Wenders. Rossellini invites us to join her as she looks at her favorite portraits, privileging us with her witty, humorous, and self-ironical comments. She traces her career, in photographs, from boxing reporter in Muhammad Ali's training camp to highly successful model, from actress in some of Hollywood's more controversial films to head of her own cosmetic line, Manifesto. Mixed in with these public images are pictures of Rossellini in private, with her children, her dog Macaroni, and her pig Spanky. Irresistibly charming, intelligent yet whimsical, Looking At Me proves the perfect complement to Rossellini herself.
ISBN: 3829600577
Publisher: Schirmer/Mosel
Hardcover : 144 pages
Language: English