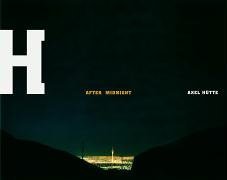 Axel Hütte: After Midnight
by Axel Hutte
Publisher's Description
After midnight, as America's cities gradually fall asleep, Axel Hütte comes alive. From the window of his hotel rooms, which are often on the upper floors of high-rises, he surveys nighttimes cityscapes, and creates for his camera, sometimes in a manner that can only be described as advernturous, genuine (i.e.. undistored by glass) views, before photographis what metropolizes like Chicago, Las Vegas, Atlanta, New York, Los Angeles and Houston reveal at this hour: the black silhouettes of buildings in front of a dark sky, rows of street lights, dots of color form neon signs, here and there a bright window. Big cities never sleep, there is no such things as complete darkness, and stars only rarely have a chance against neon and nightlife.
Axel Hütte, who was born in 1951, and is known among contemporary photographs as the 'landscape painter,' is an experience nighttime photographer. In his book As Dark as Light, published by Schirmer/Mosel in 2001, he explored the non-urban nighttime landscape, which, in its peacefulness under a starry sky à la Elsheimer or Caspar David Friedrich, becomes a counterpart to the restless sleep of major American cities. This book appears on the occasion of an exhibition of Hütte's most recent work in the Waddington Galleries, London.
ISBN: 3829602618
Publisher: Schirmer/Mosel
Hardcover : 56 pages
Language: English
Dimensions: 13.6 x 10.9 x 0.5 inches