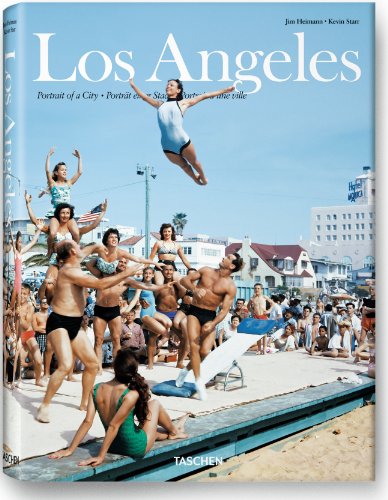 Los Angeles, Portrait of a City
by Jim Heimann
Publisher's Description
From the first known photograph taken in Los Angeles to its most recent sprawling vistas, this photographic tribute to the City of Angels is first of its kind to survey in depth the full range of the city's photographic history. Exploring the cultural, political, industrial, and sociological history via the work of myriad photographers, the book examines the city's critical developments ranging from the real estate booms of the 1880s to the uncontrolled urban sprawl of the late 20th century. With over 600 images, the city is shown emerging from a desert wasteland to a horticultural Eden courtesy of imported water. The entertainment capital of the world, Hollywood, and its celebrities are showcased. Many of the pop cultural movements which started in Los Angeles, such as surfing, and hot rods, are included, as are the cities notorious criminals. The images are bolstered by insightful texts by renowned California historian Kevin Starr and Los Angeles literature expert David Ulin.
ISBN: 3836502917
Publisher: TASCHEN America Llc
Hardcover : 572 pages
Language: French
Dimensions: 8 x 12 x 3 inches