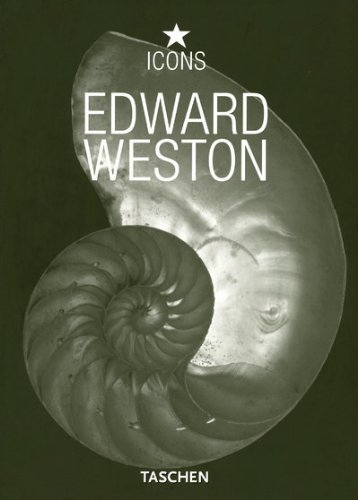 Weston (Icons Series)
by Terrence Pitts
Publisher's Description
Few photographers have created such a legacy as Edward Weston (1886-1958). After a decade of successfully making photographs with painterly soft-focus techniques, Weston became the key pioneer of the school of precise and sharp presentation, dubbed 'Straight Photography'. Through the 1920s, 30s, and 40s, Weston was a major force in pushing forward the art of photography. His photographs are monuments of sensual realism, perfectly composed images of stillness that sear with passion and intensity. Whatever the subject, be it a vegetable, landscape, shell, or naked body, Weston's lens captures the essence of its life force, the fundamentals of its form.
Amazon.com Review
In 1902, the year Edward Weston was given his first camera, few people regarded photography as more than a craft. But along with innovators like Alfred Stieglitz and Edward Steichen, Weston revolutionized the ways photographers chose subject material and used photographic techniques to create what gradually came to be accepted as fine art.

This is an elegant book, designed and printed in Germany, with an essay by Terence Pitts, of the Center for Creative Photography in Tucson, Arizona. It presents 180 of Weston's finest images, including many--such as the pines of Point Lobos, the sand dunes of Oceano, and his stark, unadorned nudes--that have become icons. Whereas the photographs of Man Ray and Moholy-Nagy were, to Weston's eyes, hopelessly mannered, his images are elemental, organic, and in harmony with nature's rhythms. Weston spent most of his working life in Mexico and California, and much of his work, replete with shadows, is illuminated with the harsh light of those places. In 1932, he and Ansel Adams founded the influential photographic collective Group f/64, named after the lens-aperture size that exposed an image at its most detailed and clear. This was Weston's aesthetic: to show the real world in its unrelieved integrity rather than create an imaginary construct. He was concerned with visual truth, not with character or storytelling. Weston was a true pioneer whose rigorous vision permanently changed the ways we see the world around us. --John Stevenson