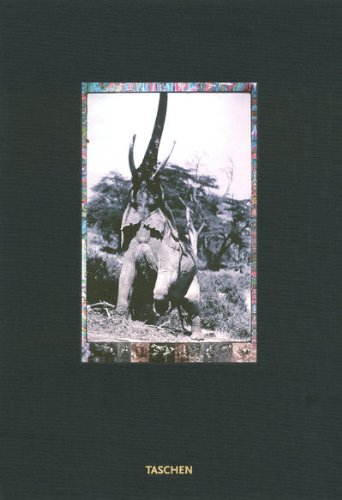 Peter Beard (2 Volume Set)
by David Fahey
Publisher's Description
Photographer, collector, diarist, and writer of books Peter Beard has fashioned his life into a work of art; the illustrated diaries he kept from a young age evolved into a serious career as an artist and earned him a central position in the international art world. He was painted by Francis Bacon, painted on by Salvador Dalí, and made diaries with Andy Warhol; he toured with Truman Capote and the Rolling Stones, created books with Jacqueline Onassis and Mick Jagger - all of whom are brought to life, literally and figuratively, in his work. As a fashion photographer, he took Vogue stars like Veruschka to Africa and brought new ones - most notably Iman - back to the U.S. with him.

His love affair with natural history and wildlife, which informs most of his work, began when he was a teenager. He had read the books of Isak Dinesen (Karen Blixen) and after spending time in Kenya and befriending the author, bought a piece of land near hers. It was the early 1960s and the big game hunters led safaris, with all the colonial elements Beard had read about in Out of Africa characterizing the open life and landscape, but the times were changing. Beard witnessed the dawn of Kenya's population explosion, which challenged finite resources and stressed animal populations - including the starving elephants of Tsavo, dying by the tens of thousands in a wasteland of eaten trees. So he documented what he saw - with diaries, photographs, and collages. He went against the wind in publishing unique and sometimes shocking books of these works. The corpses were laid bare; the facts were carefully written down, sometimes in type, often by hand, occasionally with blood.

Peter Beard's most important collages are included, along with hundreds of smaller-scale works and diaries, magnified to show every detail - from Beard's meticulous handwriting and old-masters-inspired drawings to stones and bones and bits of animals pasted to the page.

Special features:
* Two volumes in a cloth slipcase
* Volume 1: 200 pages of diaries and 294 pages of collages + five fold-outs; introduction by photo critic Owen Edwards. Nearly all the diaries and collages from the original book are included, plus two new collages finished in 2007.
* Volume 2: Image index with captions for all images from Volume 1; personal photos and early work of the artist; interview with the artist by Steven M. L. Aronson; a facsimile reprint of Beard's 1993 handwritten essay from the sold-out debut issue of Blind Spot magazine; extensive bibliography, filmography, and list of exhibitions.