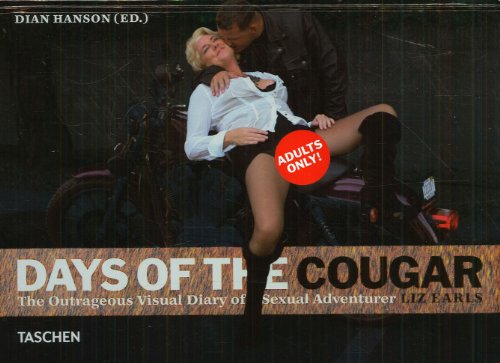 Liz Earls: Days of the Cougar
by Dian Hanson
Publisher's Description
This kitty has claws

Through the cougar's eyes: the road to sexual liberation

'My life had become a playground, and it was exactly what I wanted,' writes photographer Liz Earls in the introduction to this groundbreaking book detailing her transformation from middle-aged, overweight Human Resources director to sexual adventurer, self-portraitist, and unabashed cougar.

A cougar, as defined by the Urban Dictionary, is 'A 35+ year old female who is on the hunt for a much younger, energetic, willing-to-do-anything male.' For Earls that 'anything' must include collaborating in her quest to capture authentic human passion. Since losing 100 pounds at age 40, quitting her straight job, and embarking on a career as an erotic photographer, Earls has documented her sexual experiences with dozens of men. Her work has been described as a midlife version of Natacha Merritt’s Digital Diaries, as intensely personal, and as sexually unbounded. She speculates that a woman who has as much sex as she does—four to six times a day with multiple partners—creates an aura that draws new men to her. It seems to be true, as Days of the Cougar graphically illustrates in over 250 photographs of Earls seducing men from 19 to 32 years of age. When she decided to devote the second half of her life to pleasure, Earls realized that, 'If I just shot on the sidelines as an observer it would be boring. I had to feel it too, to put everything I’d recently learned about my sexuality into it.' She never deviates from this path, exploring every aspect of her lust for young men in graphic color and black and white photos, accompanied by diary entries, e-mails, and text messages shared with her eager prey. Sexy, shocking, and surprisingly loving, Days of the Cougar reworks our notions of age and attraction, and will inspire anyone feeling trapped by society’s expectations.
ISBN: 3836519798
Publisher: Taschen
Hardcover : 256 pages
Language: French
Dimensions: 6.7 x 9 x 1.2 inches