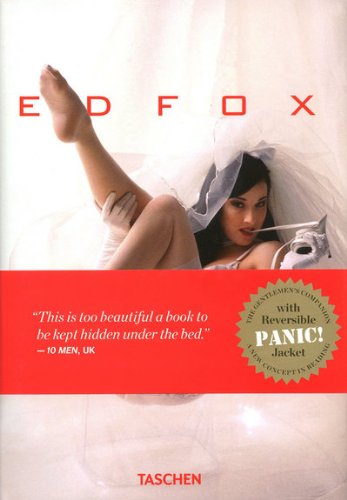 Ed Fox: Glamour From the Ground Up: DVD Edition (25)
by Dian Hanson
Publisher's Description
The most tempting part of a woman's body is her feet. Feet are a woman's second body, the one I can visually enjoy without her being offended or even aware, and never would I have imagined that my little secret would attract so many people. —Ed Fox

Ed Fox has been called the new Elmer Batters, but he's clearly no imitator. Yes, there's that 'little secret' he shares with the late Mr. Batters, but Fox celebrates the female foot in his own way, creating a style that is unique, contemporary and technically impeccable. Because he draws inspiration from both still photography and music video there's a strong sense of movement in his photos, reflecting his own energetic personality.

Fox is a native of Los Angeles, so its no surprise his specialty is finding and shooting the most compelling beauties in the adult film industry. Says Fox, 'A beautiful foot is an extra, the same as shapely breasts or a nice ass, and all part of a feminine shape. It's all about voluptuousness.' Accordingly, most of his models are exceptionally curvy from top to bottom. Fox was one of the first to shoot strip diva Dita von Teese, as well as Valentina Vaughn, Tera Patrick, Brittany Andrews, Jill Kelly, Kelly Madison, Temptress, Tall Goddess, Aria Giovanni, Jewel De'Nyle, Belladonna, Terri Weigel, Penny Flame, and Ginger Jolie, all of whom appear in his very first book.

* an hour-long DVD featuring many of the stars, with an original musical score.
* this edition's special 'panic jacket' is reversible to a realistic-looking academic book to keep the real contents hidden from your annoying boss or even help you impress an attractive onlooker!!
ISBN: 3836523965
Publisher: Taschen
Hardcover : 280 pages
Language: English
Dimensions: 6.5 x 8.9 x 1.1 inches