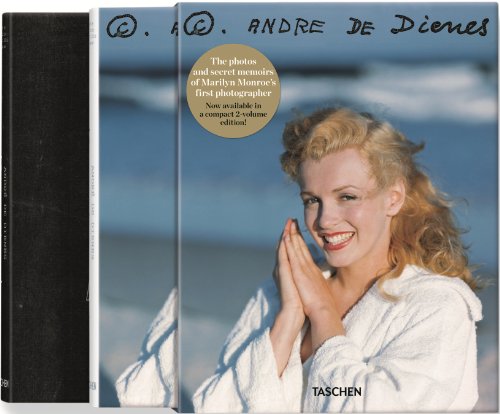 Andre de Dienes: Marilyn
by Steve Crist
Publisher's Description
Before there was Marilyn, there was Norma Jeane

Fashion photographer Andre de Dienes's life was changed forever one day in 1945 when he met a lovely young aspiring model named Norma Jeane Dougherty. He instantly fell in love with her innocence and charm and the two were briefly engaged. They took many adventurous road trips together in those early years, de Dienes shooting Norma Jeane in every possible natural setting in his original, inspired style. He soon built up a huge portfolio of stunning photographs of the smiling brunette which helped to launch her model career and, a few years later, a film career that was to make her a legend.

His entire relationship with the star, including many private moments shared only between the two, is detailed in de Dienes's secret memoirs, which were discovered when Monroe fans ravaged his home after his death in 1988.

The memoirs tell a beautiful story of love and friendship from the point of view of someone who knew Marilyn intimately; describing the transformation from Norma Jeane to Marilyn Monroe — the evolution of a sensitive, ambitious girl into a deeply troubled megastar — from an inside perspective, they shed light on a little-known side of Marilyn. From their trip to see Norma Jeane's mother in a mental hospital to Marilyn's visit to his home a few days before her death, de Dienes recounts all of the emotional moments they shared. The combination of de Dienes's memoirs and an extensive selection of his Monroe photographs (which numbered in the thousands) makes for an unprecedented, personal exploration into the psychology, history, and iconography of the world's favorite movie star.
ISBN: 3836527103
Publisher: Taschen
Hardcover : 848 pages
Language: English
Dimensions: 7.1 x 9.1 x 2.9 inches