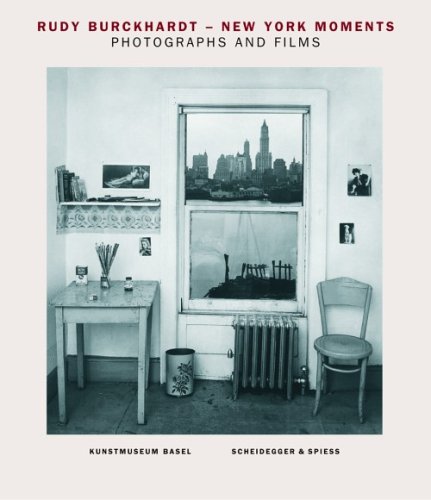 Rudy Burckhardt--New York Moments: Photographs and Films
by Anita Haldemann
Publisher's Description
The Swiss photographer and filmmaker Rudolph Burckhardt (1914–99) came to New York City in 1935 and experienced the awe that many first-time visitors to the city share. The grandeur, the energy, the vitality, the sheer movement of this American metropolis all drew Burckhardt in, and he made New York his home for the rest of his life. Equally inflecting his career as a photographer and filmmaker, the city and its vibrant cultural life became Burckhardt's muse.

Rudy Burckhardt—New York Moments is a rare collection of his photographs from the 1940s and 1950s. It includes not only street scenes and details of city life—“The tremendous difference in scale between the soaring buildings and the people in the street astonished me,” he wrote—but also the portraits he made of the New York School painters, most notably Jackson Pollock, Mark Rothko, and Willem de Kooning. As a photographer for ArtNews in the 1950s, Burckhardt had an insider’s view of the burgeoning art scene. But he also recognized the limits of photography—“a photograph, when it gets printed and comes out a picture, becomes like a fact, you know”—and turned his hand to filmmaking. For the rest of his career, photography and film would work together to capture his unique vision.

Including photographs, film stills, and interpretive essays, Rudy Burckhardt accompanies an exhibition of Burckhardt's work at the Kunstmuseum Basel in Basel, Switzerland, and is a fitting tribute to the Swiss photographer who most poignantly captured the energy of mid-century New York.
ISBN: 3858817023
Publisher: Verlag Scheidegger and Spiess
Hardcover : 144 pages
Language: English
Dimensions: 7.8 x 9.1 x 0.8 inches