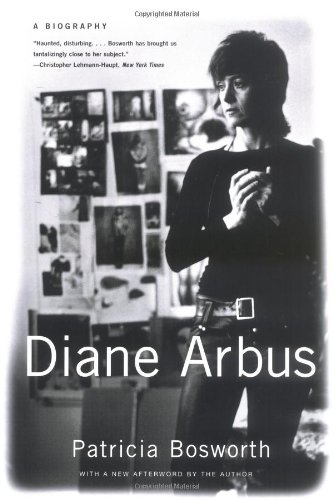 Diane Arbus: A Biography
by Patricia Bosworth
Publisher's Description
'Haunted, disturbing...Bosworth has brought us tantalizingly close to her subject.' So said Christopher Lehman-Haupt in the New York Times about this biography of the photographer. Diane Arbus exerts a fascination rooted in both her art and her life. Her startling photographic images of dwarves, twins, transvestites, and freaks seemed from the first to redefine both the normal and the abnormal in our lives. Now Steven Shainberg, the highly praised director of Secretary, has directed a film that draws on Arbus's life, work, and obsessions. Nicole Kidman stars as Arbus and Robert Downey Jr. plays her lover. Premiering at Cannes in May 2006, it will draw lavish attention and discussion when it opens in the fall.

'A biography that seems to have...more than enough material for several art legends...Patricia Bosworth has created a spellbinding portrait.' --Andrew Holleran, New York
Amazon.com Review
Opportunities for sensationalism abound in a book about Arbus, who already had a history of severe depressions and a crumbling marriage by the time she began to take the controversial, technically innovative pictures of dwarfs, nudists and drag queens that won her a reputation as "a photographer of freaks." Bosworth balances the lurid details -- rumors that Arbus had sex with her subjects, that she photographed her own suicide in 1971 -- with a nuanced appraisal of an artist whose images captured the uneasy mood of the 1960s by expressing her personal obsessions.
ISBN: 0393326616
Publisher: W. W. Norton & Company
Paperback : 400 pages
Language: English
Dimensions: 6 x 9.3 x 1 inches