Book review
Amexica
This book of 260 color pages (brilliantly composed of photos from an aerial drone as well as countless photos from the ground on both sides of the fence) may well leave you speechless as you realize the extent to which this outrageously expensive technological, physical and psychological wall...
Photographs and text by Adrien Missika
View Images

Amexica
This book of 260 color pages (brilliantly composed of photos from an aerial drone as well as countless photos from the ground on both sides of the fence) may well leave you speechless as you realize the extent to which this outrageously expensive technological, physical and psychological wall separates the United States from Mexico. One of our favorites from 2014.

If Coyotes Could Fly

Every year the monarch butterfly migrates from Canada to Mexico flying over and back across the United States. The butterflies know neither walls nor obstacles. They fly oblivious and indifferent to any kind of structure and border.

This book recounts a journey from Ciudad Juárez to Tijuana, from Rio Bravo to the Pacific. Like the migratory patterns of the monarchs or other species in the Americas, the trip snaked back and forth across the Unites States-Mexico border.

"Amexica" designates a rectangular geographic area of thousands of square kilometers that spans from East to West across an area where the population speaks mostly Spanish. Here, the landscape pivots between desert plains and arid mountains; from urban areas huddled against the borderline to white sand dunes; and then it all stops abruptly at the (Pacific) Ocean. The territory belonged to Mexico until the United States bought it in 1854. Since then, the border shifted southwards, and the United States has constructed a wall from the river to the Ocean.

The aim at the beginning of my trip was to look at this landscape, with specific attention to this absurd, hauntingly powerful barrier. I placed a camera on a small drone that I operated by remote control. It was a flying prosthetic eye. This controversial technology comes from the military, which uses it for remote surveillance and killing operations. I wanted to turn this technology against the authorities that brought it to bear – the northern side of the border – so my drone became a smuggler or, as they say south of the border, a “coyote.” As the drone flew freely back and forth, an airborne trailblazer, it allowed me to draw an aerial map of this shared area. And, more importantly, it allowed me to develop an unprecedented sensual experience, to look from and at previously unreachable locations, composing an amateur cartography with the help of remote vision technology.

Like a flying coyote, the drone filmed and photographed its own flights over that allegedly insurmountable wall. The video “As the Coyote Flies” comprises the 11 flight attempts with a soundtrack by Victor Tricard, and the present book documents these flights with pictures taken in the air and from the ground throughout the journey.

This book, and the wordless drone videos that are part of Adrien Missika's larger project, speak volumes, and communicate the vast scope and absurdity of immigration policies in the 21st century that still rely on physical walls and barriers to define man-made borders.

It is a prime example of the oft-used cliché that a picture is worth a thousand words. This book of 260 color pages may well leave you speechless as you realize the extent to which this outrageously expensive division affects the landscape and the psychology of the people who must see it and endure it on a regular basis.

The design of the book, by Emmanuel Crivelli, is direct and powerful, countering aerial stills with photographs from the ground. Tiny details are cast against vast vistas while crudely-rendered graphic maps, that could have come from a child's schoolbook, simply but powerfully convey the simplistic divisions that beset the region. 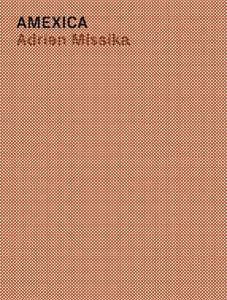