Interview
New Love in the Time of Corona
“A kind of romantic diary. Visually, I wanted to achieve a cinematic look—as if someone was watching a romantic drama and pressed pause.”

New Love in the Time of Corona
“A kind of romantic diary. Visually, I wanted to achieve a cinematic look—as if someone was watching a romantic drama and pressed pause.” 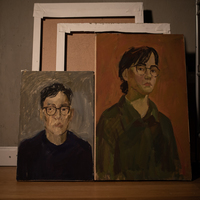 The past year and a half has forced many relationships into new territory. As our horizons began to narrow, many asked how would partnerships adapt? How would they survive? Stories of couples under the strain of the pandemic — breaking up, marriages dissolving, casual relationships getting serious — filled the press and fueled many conversations. But what does it mean to do the opposite; to embark upon something new, to start a relationship under these circumstances?

Lesha Pavlov’s project, Time to be Together, explores this very experience through his own lens, both literally and figuratively. Pavlov’s images chart the course of his connection to Polina, an artist he met through Instagram. Taking the pandemic’s restrictions as a sign, they plunged into cohabitation with the camera documenting along the way.

In this interview for LensCulture, Pavlov speaks with Magali Duzant about his photographic journey, taking inspiration from emotion and allowing the camera in as a witness to a budding romance.

Magali Duzant: To begin, can you introduce yourself? How did you begin to make photographs?

Lesha Pavlov: I was born in the village of Borogontsy in Yakutia. A couple of years ago I moved to St. Petersburg, where I still live. I started taking pictures during my student days, when I was studying to be a lawyer. At that time, I was a completely different person. My interests were limited to football, sneakers, and detective series. But I met an amazing girl, who was bright and creative. She played the drums, drew, sewed and weaved all kinds of cool things. In order to somehow relate, I decided that I also needed to get closer to art. Photography seemed to me the easiest way to get involved. And what, you take a camera, aim at an object, press a button? It’s as easy as shelling peas, I thought. How wrong I was.

Attempts to comprehend the mystery of street photography, shooting parties on film, shooting bad portraits for a very cheap price—it all started like everyone else. My idea of photography led to my admission to the School of Modern Photography Docdocdoc in St. Petersburg. There they completely updated my ideas and taught me how to think. This divided my life into before and after. Therefore, it would be more correct to clarify that I started shooting seriously in 2018, when I entered the school.

MD: Amidst a year of so much turbulence and uncertainty, how did this project, Time to be Together, come about?

LP: The first half of 2020 was weird. In February, I left to participate in my first artist residency in the Russian provinces, as a result of which I opened my first solo exhibition. I was leaving St. Petersburg, boiling with life, when the news of a pandemic was not perceived as serious. I returned to an almost empty city, seized by panic. I had to lock myself in the apartment and spend the next few months in it. I had plans for my next projects and expeditions; some had to be postponed, while others were completely abandoned. The most difficult thing was not being confined within four walls around the clock, but rather realizing that suddenly an overwhelming force had appeared; one capable of making not the most pleasant of adjustments in my life.

I occupied myself by reading a lot, watching movies, and trying to set up creative experiments. I tried the methods of remote shooting, which by then had become trendy. I even came up with a computer game based on my experience of isolation. But I had a quarrel with my friend, a programmer, who had kindly agreed to help me with the technical part of the development, and the almost finished project sank into oblivion.

Actually, I fought a lot with people at that time. But this didn’t prevent me from getting to know Polina during a very strange period, when I was already very tired of all the consequences of self-isolation. I did not understand what to do with myself and how to adapt to the new rules of the game. And then—boom. Suddenly there was romance. It seemed that so many couples were breaking up, unable to withstand the forced distance or, conversely, the forced proximity. And then a new person appeared in my life. I flew, inspired by feelings; I literally drew inspiration from my own state of mind. Thanks to this, I have felt a new taste for life. And so, I thought I should try to somehow capture the events that caused this.

MD: What was the impetus to photograph your relationship? Was this something new? Or have you photographed yourself or partners before?

LP: I assumed that this would be a simple story about people who met and fell in love with each other. A kind of romantic diary. Visually, I wanted to achieve a cinematic look—as if someone was watching a romantic drama and pressed pause. It seems to me that this echoes all the surrealism of the past year and the peculiarity of the circumstances in which I met Polina.

With the development of our relationship, the influence of the corona crisis on it began to be clearly traced. At that time, I did not have a job in an office, and Polina was transferred to distance learning. As a result, from the very beginning, we spent almost all of our time in the same space. I decided that I needed to pay special attention to these aspects.

MD: Was this a way of understanding or exploring the relationship for you?

LP: Naturally, I shot a lot in a documentary manner. But, to be honest, I liked it better when Polina and I sat down to discuss how we could show this or that element of our everyday life with the help of staged photography. We thought about everything—the situation, the meaning, the composition, the light. I felt in those moments a special unity, because it is wonderful to be carried away by one thing. Co-creation helped a lot, as having a camera in a relationship was new to both of us.

MD: Can you speak about the editing process? How did you weave between the documentary and staged aspects of the work?

LP: We pondered what aspects of our relationship should be reflected in the photographs. Sometimes it was necessary to completely stage the scene and shoot it. For example, the picture where Polina is sitting in a room at a work desk, and I am standing in the corridor and looking in the mirror. It was a new feeling for me when I turned into a threat to my girlfriend, having been infected with the coronavirus. It was impossible to escape from this, since we still had to isolate together. I wanted to somehow share my condition with the viewer. I detached myself behind the wall and filled myself with red light; the color of anxiety.

And sometimes, everyday life itself throws up cool ideas. I wanted to get my headphones out of the desk drawer and realized that they were intertwined with Polina’s headphones. It is very simple and ordinary, but so symbolic. To be honest, this is one of my favorite shots in the series.

MD: Was there any aspect of the relationship that you could not translate into a photograph?

LP: I think that the language of photography can convey absolutely anything. Specifically, this work lacks a crisis. It may sound a little blasphemous, but I regret that I did not record the quarrels on camera. All couples have crisis moments—this is normal—but for some reason I did not feel a need to talk about them at the time. I don’t know, maybe the story itself is a little different.

MD: The text that accompanies the photographs feels diaristic at times. How do you view the role of text within this work?

LP: I love to write. Although I am of the opinion that when looking at pictures a person automatically decomposes their meaning into certain textual meanings, I always have a need to provide my work with accompanying text. It doesn’t matter if it’s a documentary project or not. Working on Time to be Together I felt this need more than ever, because it is a very personal story. Perhaps I deliberately wanted to remove the freedom of interpretation. With these pictures, I talk about myself and about my beloved, about feelings, about intimate things. Naturally, I wanted to convey to the viewer everything I wanted to say, so each photo is equipped with a rather lengthy caption. I considered combining photographs and handwritten inline text, but dropped that idea as it would kill the romantic movie ‘freeze’ effect I mentioned earlier.

MD: Over this past year many people had to adapt to new routines, from working from home, to having limited mobility and plans canceled. Did you find there was a difference in your image making process with this project compared to previous ones?

LP: I admire the courage of colleagues who reported from the epicenters of the disaster or made projects related to the dire consequences of the pandemic. But, to be honest, I missed the simple, personal and intimate stories about Covid. The pandemic has affected everything—our freedom, our daily routine, the concept of work and play, love and friendship. I would like to see more projects about this, more sincere autobiographical stories.

I was a little frightened and, at the same time, fascinated by the prospect of turning Time to be Together into a photo project of my whole life, because I would have to shoot all the time during our relationship with Polina. But the work stopped when we parted. I spent a wonderful eight months with this girl and am infinitely grateful to her for this time.

MD: After such a year what comes next?

MD: Life goes on as usual. For the past six months, I’ve been rethinking photography within myself. I want to do some absolutely crazy things. I have a lot of plans.

Editor’s Note: We discovered this work while reviewing submissions for the New Visions exhibition at the always-excellent photography festival in Italy: Cortona on the Move. If you can, treat yourself with a visit this summer!