Book review
Higley
The American Southwest is slowly succumbing to the inevitable sprawl of suburban developments. Former resident Andrew Phelps documents the demise of a small rural town as it is bull-dozed into another massive, generic bedroom community.
Photographs and text byAndrew Phelps
View Images

Higley
The American Southwest is slowly succumbing to the inevitable sprawl of suburban developments. Former resident Andrew Phelps documents the demise of a small rural town as it is bull-dozed into another massive, generic bedroom community.

Anyone who has taken a road trip through the American Southwest has passed through towns like Higley: unlikely tough-scrabble little communities that crop up like weeds and cling to inhospitable territory, lingering, lonely, and surviving like a desert cactus.

Towns like Higley start out not even on the fringe of a larger metropolitan area. They exist seemingly in the middle of nowhere, and few people take notice that they are there at all.

Like so many similar tiny pioneer towns in the Wild West, they attract and nurture quirky behavior, social misfits, outsiders, and quiet people who just like to get on with their lives with nobody near to bother them. There is little concern with status or conspicuous consumption. Architecture is shelter and not much more. Anonymous and unambitious, these places are dots on a map that you might miss if you blink as you blast past on a highway.

Photographer Andrew Phelps grew up in Phoenix, Arizona. His grandparents, all four of them, had lived in Higley, quite a few miles east of the influence of Phoenix. Phelps remembers childhood visits to Higley, where people farmed, and raised horses, and lived quiet, uninteresting lives. It was dull, hot, dry, lifeless and rather boring for a young energetic boy.

So, it was quite a surprise — and an intellectual disconnect — when Phelps heard by phone that his sister and her family had just bought a home in Higley. At the time, Phelps had been living in Salzburg Austria for several years, with his wife and family, and he could not imagine why in the world anyone, much less his sister, would want to stake a new life in Higley. But then he understood. That sprawling monster of a western town, Phoenix, had steadily crept across the desert and was about to swallow up Higley as it continued to spread out like a fast-growing cancer.

Phelps said, “What I didn’t know is that the turn of the [21st] century had changed Higley from a community of farms to a community of bedrooms... Higley supplied what progress demanded: great expanses of flatland and no historical infrastructure to stand in the way of the giant strip malls, fast-food chains, and freeway turnpikes that would become the brightly-lit circulatory system of this new, affordable Higley.”

That’s when he felt compelled to go back home to document the changes with his 4x5 camera. The result of the three-year project is a great photo book (part love story, part sociological documentation, part bemused amazement) that shows the transformation of an individual community that describes in a more general way the new face of the American West.

Alec Soth writes, “Why do we take pictures? To preserve memories? Stop time? Tell stories? Andrew Phelps’ photographs of Higley, Arizona do all of these things. But most of all they make me want to go out into the world. Stripped of the usual tendency toward cynical sensationalism, Phelps’ pictures depict Higley with a mixture of clarity and affection. After looking at this remarkable book, I feel like going outside to chat with my neighbor.”

Lens Culture is happy to share a handful of the images from the book with you here. But to appreciate the richness of the story, and the beauty of the photos, buy a copy of the book, and enjoy it in a slow, leisurely way. 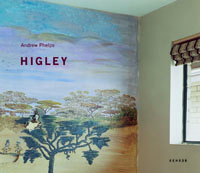