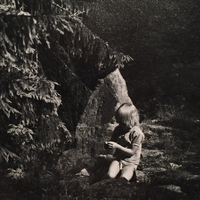 Within the oddly shaped and always surprising rooms of FOAM, van der Molen’s exhibition felt like a calm, isolated space of its own. While the rest of the museum bustled with crowds and the numerous small prints of both Francesca Woodman and Jacques Henri Lartigue, “Blanco” was imposing, absorbing—a stately exhibition filled with large, dark images of wild places. On this scale, the pictures, even if familiar from Awoiska’s book Sequester, take on a timeless, monumental, and even foreboding quality.

After seeing the work, I visited her studio, where we passed two hours with tea and cake, talking about her show, her book, her travels and the evolution of her vision. Van der Molen even showed me some early work (including a few pictures that will never be exhibited!) and her treasured fairytale books, an early source of inspiration from her childhood.

Thus, our conversation was wide-ranging but never dull. These are some highlights, grouped by subject: 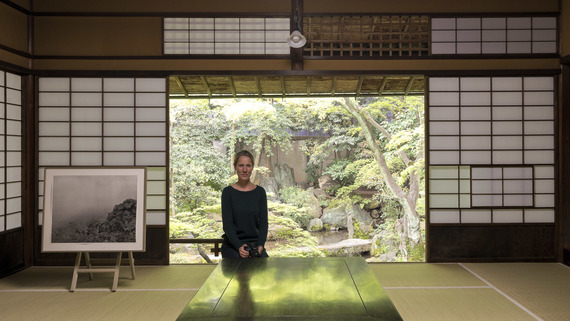 JF: I have heard you described as an einzelgänger. What’s that, a lone wolf?

AM: Yes, it’s a German word meaning someone who goes alone. An einzelgänger is someone more unto themselves and completely fine with not being too social. A person who can easily live on their own. You can be in a relationship, but can easily do things on your own.

To be on my own for two or three weeks allows me to forget all the distractions of the modern world. I wander around, sleeping in my car if I can, not having any contact with others. Any social interactions can interfere with the present moment, the now. Only when I feel more empty on the inside can I find it easy to allow what is around me to enter.

You can see this in my work, when I immerse myself in the landscape. To make my pictures, I need to be there completely on my own.

JF: Are these strictly photography trips or would you go there anyway, even without a camera?

AM: No, I wouldn’t go there all by myself just for the visit. But then, sometimes, I think I should really just have a holiday for one week, somewhere warm to rest. As soon as I imagine that though, I remember I must bring my camera—because what if I miss something?

But I do miss things, sometimes. When I was in Venice, visiting the biennial, I saw something and I could have photographed it. But if I had, it would not have seemed fair. It would be as if I stole a quickly found image instead of immersing myself slowly into a landscape.

It’s not meditation, exactly, but it’s a state of mind that occurs when you are very open to the landscape, a moment when your mind slows down on its own. Normally, I’m too worried about little things and all this stops when I’m alone in nature. I can leave behind the luxuries and the wi-fi and the distractions and finally discover myself.

Such moments in nature take us back to where we were meant to be. To survive in the wilderness, when there was nothing else, is so fundamental, so beautiful.

JF: How do you decide where to go? And why not Holland?

Holland is so flat, you feel vulnerable and open, even where there are rocks and trees. And when the land is flat, the lines become too formal and abstract. I just don’t find it interesting.

I try to get away from the center of a place, so in Norway I go to the far north, or in Spain, I go to Andalucia, or in Japan to a distant island. In Australia, it would be Tasmania. I go to the end, where you feel you are really alone. The furthest place, the most remote.

JF: Why don’t you identify the places you photograph?

AM: For the viewer, it’s too easy to relate the image to what you know, or think you know, about the place already. One of these images is made in Kosovo, so you would have all these associations already and it’s easy to be distracted by that.

I’m really making the work for myself and I’m glad it can be in a show. But even then, I do not want to tell anyone anything. I like when it confronts you, the viewer, with something that you didn’t know. That’s when you really have to listen to yourself.

In Dutch, “Blanco” means when something is unwritten, left empty. Blank…So, I don’t want to steer anything, only offer the image. No words. Only the negative number accompanies the photograph, but even then, some people try to find a meaning in this number. But no—just feel!

JF: It’s an atmospheric show. Very quiet, spacious and still, with just a few large images. It slows you down after you come in from the busy-ness of the rest of the museum. It makes you want to take your time and move in close to each picture.

AM: I have to make them large enough to recreate that feeling of what I experienced in the environment—a whole atmosphere coming towards me. A book is intimate, but when you get in close to a print on the wall, you have the chance to see the texture and grain of the material. You can feel the soul behind it.

To stay true to what I encountered in the landscape, I have to continue this way of slow working in the darkroom. In my studio, I continue to make my work prints and exhibition prints. For a very large exhibition, such as this one, I had the luxury to work together with a printer. Still, being the artist, I always want to be there to see the work finished. Those little marks and dots, from dodging and burning, make each picture unique. They might seem perfect from a distance, but when you examine them closely, you can see the traces that someone was working on it.

Other photographers work with print houses where you give them the digital file, but for me that really would cut apart the whole work. When I have pictures digitally printed they seem too clean, too perfect—not breathing.

AM: Yes, I was the first winner of the Hariban Award in 2014, so I went to Japan to work with Benrido Collotype Atelier. They use a collotype printing process from the 19th century. Kyoto is the only place where it remains in use because there are so many temples and museums nearby who want their collections of old scrolls and drawings reproduced—and this process works best.

While there, I spent two weeks making prints of eight of my pictures. They did the printing because it is so laborious and complicated and I was there to guide them with an interpreter. It was a beautiful experience. They saw it as a huge challenge because the images are so dark. Many layers of ink are carried on thin paper.

JF: Sequester feels like an epic book. There are only 24 pictures, but they add up to something bigger.

AM: When working on the book, I knew it was a different language from an exhibition, although I never had made a book before. In a book, the images have to flow from one into the other, so it creates a different world, but still the same feeling.

JF: Having some pages on black paper with details from the main pictures really gives it more depth and emphasizes the form of the book as a medium of design and print.

AM: It also changes the feeling from being only picture after picture after picture. Instead, you become drawn into something that you don’t immediately understand. It recalls an unreachable territory. It was a great idea by the designer because it emphasizes what I experience myself in nature.

Similarly, for the title, I was looking for synonyms of “secluded” and “solitary.” Eventually, I found “sequester.” What made me go out into the wilderness, first, was the need to remove myself. It was voluntary, but also a bit forced—it’s the distracting rush of daily life that makes me do this.

JF: You seem to take you a long time to come up with new work. Is that because you don’t take many pictures or because you take pictures that you’re not happy with?

AM: I don’t take many pictures. It’s not so much what I see, but what I experience—so I need an intuitive connection. This doesn’t happen often. If the feeling is not happening too strongly, then it will not be. That means after every trip, I’m happy for there to be 3 or 4 images—even after 3 weeks. In fact, often I’m happy if there’s only one!

When I started going into the natural world in 2009, I photographed these broad, huge landscapes. I would stand on a hill thinking “Ah, beautiful!” but when got home I was really disappointed—the landscape was just lying there in its beauty. I did not feel it was my eyes that were seeing this. If someone else had been there with a camera, it would be the same picture.

So, I found that I was feeling really outside the landscape. Trip after trip this happened, until I decided I had to go deeper. I needed to find somewhere beyond the kind of perspective we have learned from landscape painting and find something more personal.

For example, the image on the cover of Sequester has a black space in the middle. In this blackness, there is lots to discover. It’s not really inviting you to step in, but its mystery is certainly tempting.

This has been a gradual, continuous process. Even as far back as 2007, 2008, when I was making work that was not what I was looking for, I was still learning. Especially when a work is not satisfying, I like, at least, when the picture can tell me how I can continue. Amidst the frustration, suddenly it gives answers and immediately new questions. I’m really happy when the work itself can tell me that.

But in general, I don’t work in projects. After Sequester, people were asking what’s my next project about. I’m just continuing to work. My photographs are so much about me—and I am not a project!