Book review
Joining Wonder
In this book about the lasting impact of war, Binh Danh and Robert Schultz create chlorophyll prints out of leaves found at historical sites in the USA.

Joining Wonder
In this book about the lasting impact of war, Binh Danh and Robert Schultz create chlorophyll prints out of leaves found at historical sites in the USA.

There is both a skill and a philosophy in a woodworker’s understanding of “joining.” How do you take two separate pieces of wood and join them together to make one solid unit? There are joints and glues, dovetails and miters, and a thousand ways to solve the need. If the joining is bad, the whole thing falls apart. If the joining is good, the seams become irrelevant and the chair or cabinet or desk will last centuries.

Perhaps not oddly at all, I find myself thinking of a woodworker’s understanding of joining as I read War Memoranda: Photography, Walt Whitman, and Memorials, by Binh Danh and Robert Schultz. It is an extraordinary, wonderful, moving book that joins the disparate into solid art.

The Chlorophyll prints are especially poignant. Schultz explains the process, which he learned from Danh, by saying: “Lately I have traveled there with some regularity to browse the grounds, to look from the high situation of the house across the Rappahannock to the spires of old Fredericksburg, to photograph the catalpas, and, with permission, to pluck a leaf from the trees that have grown from ground soaked by what Whitman called the “butcher’s shambles” of war. I carry the leaf to my car, where I lay it on a felt-covered board, then cover it with a plastic transparency and a sheet of glass. The transparency is printed with a soldier’s portrait…and when I clip these layers together I place the board in the back window of my car where the sun pours down. As I drive home to Roanoke, some three and a half hours away, the leaf will begin to change. Where the transparency is clear the leaf will bleach, and the soldier’s image will appear, embodied in the leaf’s sheltered pigments.”

Joining a portrait to a leaf is one of the many genius marks in this book. However, Schultz and Danh go one step farther and join the images to lines from Whitman’s poetry.

Tenderly I will use you curling grass
It may be you transpire from the breasts of young men
It may be if I had known them I would have loved them.
(From “Song of Myself” by Walt Whitman)

Throughout the book, left and right pages face each other with images and quotes. Images often face other images. In a few instances, the poetry is by Schultz and his work is both compelling and rich.

When I tell you I found the book breathtaking, I am not speaking metaphorically.

In her essay “Stricken,” Molly Rogers asks, “What moves in the faces of these men? Do they feel courage or stoicism, fear or anticipation? Is the Union soldier holding his fingers still upon the strings of a banjo impatient with the photographer, busy about his trade, or is his lost in the thought for the person who will receive the image for which he now sits? Is the bearded Confederate soldier dressed in a shell jacket grateful for the diversion from battle afforded by this moment, or is he grateful for the opportunity to prove his worth as a man on the battlefield?”

These are the questions we ask, looking at the page. And while similar questions could be asked about any portrait, the fragility joined to the image by the Chlorophyll print makes each wondering gut-true.

It would be a mistake to say War Memoranda is all Chlorophyll portraits. Binh Danh’s cyanotypes seem ancient and they provoke that particular way of seeing we use when we’re looking at the very old. Whatever the space is between journalism and anthropology, that’s the distance we travel looking at his work. Perhaps it’s the difference between truth and Truth.

Obviously, War Memoranda is about Walt Whitman, his work in hospitals and his writing during the Civil War. Far from dry or familiar scholarship, though, the book’s essays open Whitman to a general audience. Barbara Bair’s mini-biography is clear and detailed and focused on Whitman’s roles during the Civil War. Stanley Plumly’s essay, “Whitman’s Organism,” unpacks the poetry itself. David Lehman’s contribution again addresses the poetry, but this time looking at the ideas that provoke and result from the lines.

War Memoranda teaches a lot about Whitman. It also calls out deep emotions about war and the fragility of life. If you accept the idea that words and photographs can hold multiple meanings simultaneously, then let me say that this is a book of urgent wonder. To wonder is reflective but intellectually active. It’s something you do. I wonder what’s over there. I wonder what would happen if. Wonder is also the word we use when we’re gobsmacked by something. I sat back in wonder at the sight.

Of course, like the very best books about the past, more than anything, War Memoranda is about now. That’s why it’s urgent. It’s about all the messy, petty, selfish bigotries and fears and divisions we seem to be revisiting. Whitman and the Civil War and the photographs are the lens through which we see our current behavior.

As Schultz says in his introduction, after quoting a fragment of Whitman’s poem “Reconciliation,” “War Memoranda aspires to a similar humanity, and to be a kind of memorial itself—a call to our better angels of reconciliation. Portraits, therefore, dominate this book. We insist on the confrontation with the individual person and his loved ones, on those who chiefly fought and suffered. We have rendered no officers or politicians.”

Let’s hope we all see this book. Act fast. 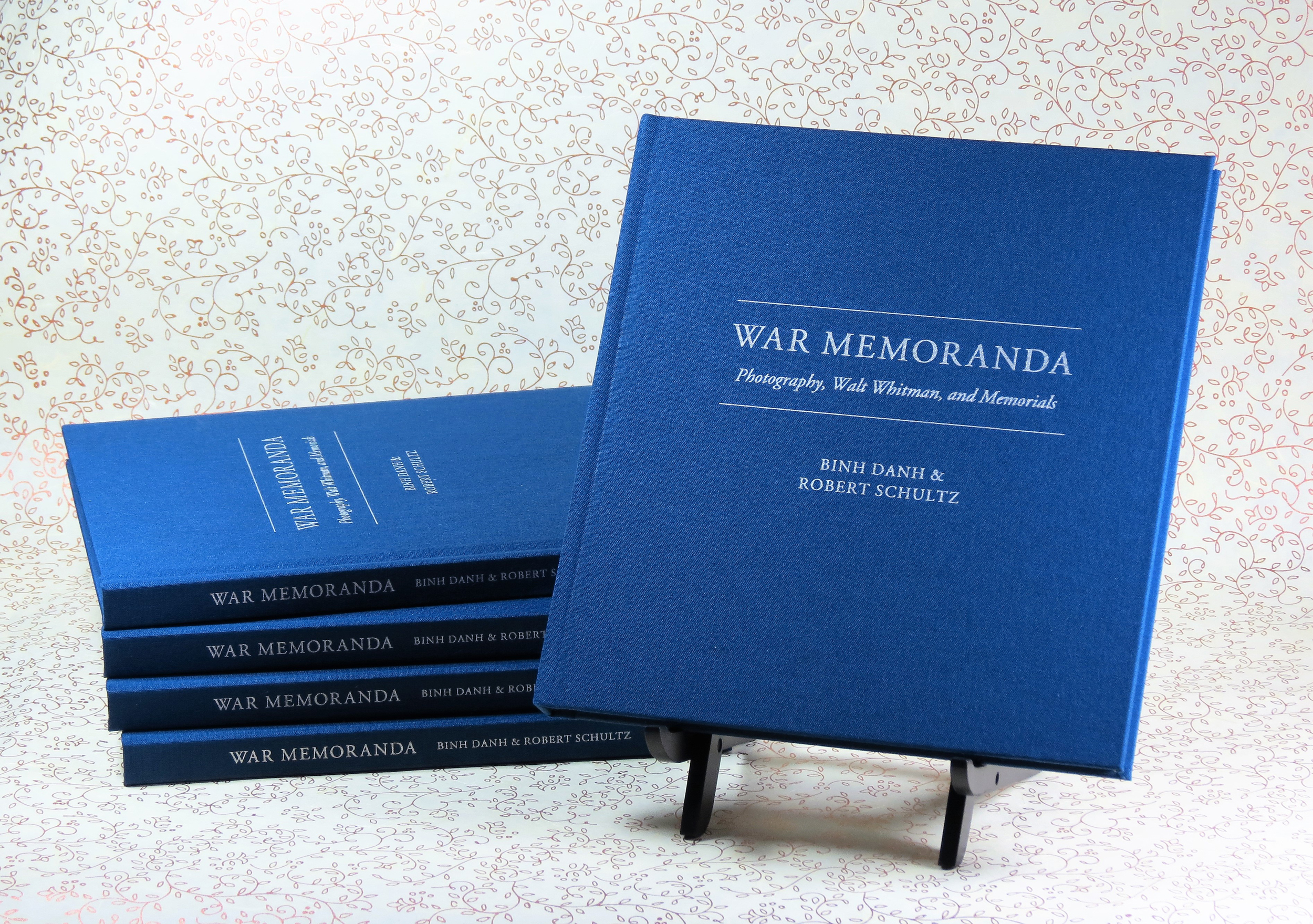