Interview
The Formidable Impact of Double Exposure Photojournalism
Definitions of photojournalism (and visual storytelling) are expanding every day — a cutting-edge practitioner shares her insights from the “far end of the spectrum.”
Interview with Daniella Zalcman
View Images

The Formidable Impact of Double Exposure Photojournalism
Definitions of photojournalism (and visual storytelling) are expanding every day — a cutting-edge practitioner shares her insights from the &#8220;far end of the spectrum.&#8221;

Daniella Zalcman is a documentary photographer focusing on the legacy of Western colonization across the world. She recently won 2016 FotoEvidence Book Award for documenting social injustice. Her project, “Signs of Your Identity,” explores the legacy of Canada’s Indian Residential Schools, which began operation in the late 1800s.

She worked as a traditional visual reporter before finding her own voice by embracing double exposure and adding a layer of narrative to her stories. She spoke with Blink’s Laurence Cornet about her projects and about breaking the formal boundaries of documentary. 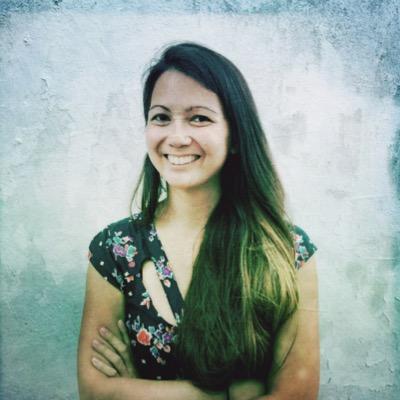 LC: How did your double exposure project Echosight first come about?

DZ: I moved to London in 2012 and started a personal project, New York + London, which explored my nostalgia around leaving New York, and how familiarity dictates the way we photograph. The result was a series of double exposures; one image of New York and one of London melted together.

Echosight was more or less the same concept, with a collaborative component. I was shooting in London while a partner, Danny Ghitis, was shooting in New York, and we would combine our photos. We did that every single day for about a year and it became a little overwhelming so, we started to have guest photographers take over the Instagram account for a week; we have had incredible people come in and play around—Ed Kashi, Anastasia Taylor-Lind, Barbara Davidson, David Guttenfelder, and Ruddy Roye to name a few. Documentary photographers work with so many constraints; we are all constantly terrified of crossing the line of what’s considered ethical and appropriate. Echosight was a chance to completely drop all of that.

LC: In this specific context, where two works become totally dependent on each other, what are the merits and challenges of collaboration?

DZ: When two separate visual thinkers communicate well, they can produce incredible work. The photography community is a family. The more opportunities we have to work together and give each other feedback, the better our work can be.

At the same time, photography is everywhere. You have to do something extraordinarily different to get someone to stop and think about a story. I think that this is the reason why media outlets are now really receptive to alternative kinds of photography. Two great editors from Al Jazeera America and I came up with this idea to document the first anniversary of the Ferguson shooting by having a young black photographer from Ferguson and a young black photographer from Baltimore take photos, and I blended their images into “echosights.”

This was a great counterpoint to the work that came out of those two cities. Many of the journalists who went to cover those stories weren’t familiar with the communities and didn’t necessarily understand the tensions that existed there — so we wanted the project to come from a place of more nuance.

LC: There is definitely an opportunity with double-exposure on the individual level as well. Can you talk about the narrative possibilities of double-exposure and why you started to include it in your documentary work?

DZ: Double exposures add an extra layer of storytelling. For example, take my project on the residential school system in Canada, a series about boarding schools for indigenous children founded in the early 19th century. In brief, these schools intended to whitewash and forcefully assimilate indigenous kids who were kidnapped from their reservations. They would be forced to wear Western clothing and were not allowed to speak their own language, to practice their own religion or their own culture in any way. On top of that, there was rampant physical and sexual abuse. This story deals with the past and with memory and to me, a straight series of portraits wasn’t going to be enough to tell that story. So, I created multiple exposures with portraits and sites relevant to former students’ experiences.

LC: Speaking of sensitive and under-reported issues, you also worked on the evolution of homophobia and anti-homosexuality laws in Uganda. Can you talk about the challenges you faced and the way you approached this subject?

DZ: I’ve always been drawn to stories about sexual and gender identity because I think that is one of the defining human rights movements of my generation. I was on my way to South Sudan to cover the independence in 2011 and I happened to get to Kampala shortly after Uganda’s first and most prominent LGBT rights activists had been murdered. So I shot a series of portraits of LGBT rights activists in double exposure. All of them were out in Uganda and happy to have their faces visible, but Ugandan media often appropriates imagery from Western journalists and runs theses images under headlines like “kill the gays.” Double exposure was a way to avoid this.

LC: You just became a member of Boreal Collective. How does it feel to be a part of a photo collective which has a non-formal approach to reportage as well?

DZ: I’m so honored to be a part of Boreal and I think that my work fits in very well with the spirit of what the members focus on. They all work on these slow, thoughtful explorations of identity and environment, something for which I have a lot of respect for. Nowadays, we all have editors who want us to work quickly but what photographers mostly need is a good collective conscience!

I find that we photographers can be very secretive about our work. So, it’s nice to have a trusted little family where I can send out a bunch of images and ask, “Does this make sense? Am I on the right track?”

LC: Be it with double exposure, fiction, or pedagogical tools, you break the constraints of reportage. Can you comment on the innovation and experimentation in photography for better storytelling?

DZ: Right now, we are redefining the meaning of photojournalism and reportage. It’s funny how World Press Photo comes out with new stringent guidelines every year, while I see more innovation and experimentation in photography. Is my double exposure work reportage? Maybe not. Is it journalism? I think so.

I’m not going to argue my case for whether or not I should be able to submit to photojournalism awards. More and more people are agreeing with me and are expanding the definition of reportage. Anastasia Taylor-Lind is currently working on a project where she sends a postcard from Donetsk, with the names of the people who fought and died in the war there. That’s not photojournalism at all, but it is storytelling and it’s incredibly powerful.

So, our vision is getting much broader and more exciting—and I’m happy to be working on the far end of the spectrum.